A Waking Dream About Ants 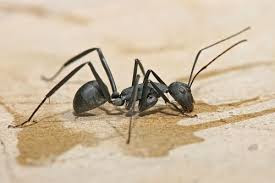 This week we’re going to examine a short waking dream about finding ants in a bathroom. The dream is interesting, not only because of the message it delivers to the dreamer, but because it is an opportunity to discuss the role of animals in our lives. First the waking dream:

A waking dream about ants
I can understand ant invasions during warm weather—especially springtime around here. But it’s December, so I was a bit surprised and perplexed to walk into my bathroom and see this long column of ants heading from the top of my shower stall, all around the rim of the toilet, and then onto my lavatory countertop. I don’t know what attracted them all of a sudden. I keep the place reasonably clean, and I certainly haven’t changed my habits in the last few months, so why me, and why now?

An important role that animals play in our lives
It is a distressing peculiarity of life on Planet Earth, that almost all animals, in order to survive, must feed off of other living organisms. As we know, some animals eat only plant material, but others—both wild and domesticated—are intended to prey on their fellow animals. There are untold numbers of creatures, from spiders to sharks to lions to man, that rely on killing something in order to survive. Even animals of relatively high consciousness—like deer and seals and domesticated livestock—regularly become meals for fellow members of the animal kingdom.

As much as any culture on Earth, Native Americans have a deep understanding for the role animals play in this brutal-seeming structure of predator and prey. Native Americans know that animals have a different understanding of death and their own participation in life than we humans do. Even as prey is sometimes literally screaming in fear and distress during a kill, there is a part of itself that understands its role in providing food for its fellow creature. What it does is to literally, give itself.

The same is true of animals who offer themselves in other ways to help fellow creatures survive and thrive. Again, the Native Americans understand the concept of the totem—an animal that appears to someone in order to leave a symbolic message. For example, if one sees a bear, that animal is often associated with hibernation, and its sighting delivers a message about “going within.”

Some animals deliver messages simply by being seen. Others—like their fellow creatures who become food—deliver their messages through dying. People come to me frequently with their waking dream, animal encounters that involve an animal’s death: hitting a deer with a car, the violent loss of a pet, a bird flying into a window. In every case, there is a message that the animal has sacrificed itself in order to deliver.

The animal that dies gives completely of itself. But it is hoping for something in return: It wants its gift acknowledged and recognized. Whether it dies to become food or to deliver a waking dream message, it wants to know that its contribution was understood and appreciated. That is even the case if the animals are a column of ants.

More of this discussion on Wednesday.
Posted by David at 11:49