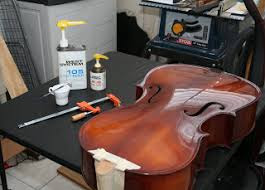 We’ve been examining a dream about the efforts of a restorer to fix a broken cello. Metaphorically, he described the cello as “a device that makes sounds in a beautiful way.” It had been “languishing,” and it needed to be renewed. However, he was not fixing it to sound good again, rather, he just wanted it to look good. In his own words: “It would be disappointing if any part of me ever attempted to use it for its intended purpose.”

So why bother? And more to the point, what was this “device” living inside of him that was designed (metaphorically) “to make sounds in a beautiful way?” It was time to ask the dreamer.

David:  Tell me what this is all about, Steve.
Steve:   It’s good I’ve had a chance to think about it for a while, because at first I wasn’t really sure. There’s always this tendency to try and see things in dreams the way they literally appear. My first thought was, “Well, this is about making music and playing the cello.” But the fact is, I don’t play cello, so that seemed a bit farfetched.
David:  But you say you were able to think it through some more?
Steve:  I guess so.
David:  If it helps, dreams are almost always about something going on in your life at this time. Even if, in your dream, you are grappling with an issue that you have struggled with your whole life, you’re dreaming about it now, because you’re still struggling with it in the present moment. If I were to ask a question that would help focus you, it would be something like, “What’s most on your mind these days whenever you have a few moments to sit down and ponder life?”
Steve:  The thing I keep getting is about my workshop. I finished my apprenticeship a year ago and I set up on my own. Obviously, I modeled a lot of what I do after my teacher’s business. But there are a surprising number of things he did that I don’t much care for. There’s such a tradition in my field, and he follows it all. But I really think I could do a better job if I broke away from some of that and just acted like me.
David:  What does that mean: “Just acted like me”? Isn’t that what you do anyway?
Steve:  Not really. There’s this role you have to play in the violin restoration business. There’s a certain arrogance that comes with the whole mystique of secrets and history and famous makers. There’s a real tendency to fall into that silliness.
David:  Really? How about your customers? Do they expect this acting job from you?
Steve:  Actually, the nicest ones don’t care, and I just find myself relaxing around them and being normal. Then, when I’m relaxed, I think I do better work anyway.
David:  What do you think your dream is trying to tell you about all this?
Steve:  (laughs) Now that we put it in this context, it’s pretty obvious: I have to “fix” things right. That means, getting rid of the old, broken stuff in me and replacing it with something new and honest.
Posted by David at 09:37