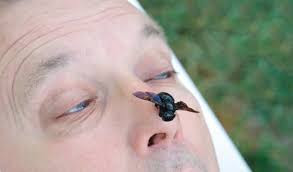 On Monday, I began relating an experience I had 25 years ago on a farm in Vermont. I had begun my metaphysical studies, and was sure of what I knew and how to handle the "inner realms." As with all of us who have a decent amount of book learning but not much practical experience, my over-confidence was about to get me into trouble. I had been walking the perimeter of my farm--this in late autumn--checking to see that all was well. I wanted to do this in a mindful way, staying in tune with the elementals who are responsible for the natural world and can offer important insights about the needs of the local animal and plant populations. If one is tuned into these beings and their message, it can be of great assistance.

The trouble was that I understood what I was supposed to be doing, but didn't really have the necessary skills to go about it correctly. I kept making an effort to communicate with these natural entities. I would silently send them a message or ask them a question, and without a doubt, the response would come back to me. The trouble was that the response was coming from my own brain; I was making it all up.

Probably in some frustration, the elementals did, finally, communicate with me in a way that was unquestionably not from my own head: They sent a totem. It was an animal capable of delivering the very message I most needed to hear, namely, that I wasn't succeeding in what I had set out to do.

The animal was a bee which somehow came out of hibernation in late October in northern New England, and stung me on the face. What seems so comically obvious now was shocking and upsetting at the time. Here I was, being particularly conscientious, going out of my way to include the inner realms in my work. Instead, from my perspective at the time, I was abused and maligned. There was no question in my mind that I had received a message from the "world of the fairies." I just could not understand why they were being so cruel to me.

These days I just laugh and shake my head at my own naivete. It seems amazing to me now, but it took me over a year of periodic pondering to finally understand that all the elementals were trying to do was get my attention so that I could correct something that I was doing wrong.

Yes, now I laugh. But there is something else I do as well: I send thanks. Any time a bee uses its stinger, it dies, and from a purely outer-world perspective, this bee had no cause to sacrifice itself. I was not disturbing a  nest or invading a special territory; I was simply walking in the woods. Yet this bee came out of seeming-nowhere in brisk, nearly-frigid weather, and stung me. Not only did it behave uncharacteristically for its species, but it gave its life to help me. It became my teacher, offering me a lesson that has stayed with me ever since. I am eternally grateful to it.