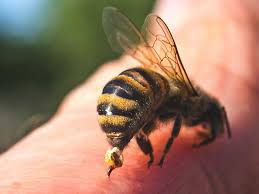 This week I’ve been writing about how I was stung while walking in the woods in Vermont in late October. The weather was cold—easily in the 40s—and the likelihood of this incident taking place was small. Bees don’t function well in cold weather, and this one ought to have been hibernating. Instead, using powers and abilities that I could not even begin to understand, it “attacked” me when I had done nothing to provoke it.

As I explained in Wednesday’s post, the “attack” was not intended as a belligerent act, rather, its purpose was to teach me. A question I asked myself for months afterwards was, “Why was it necessary to be so extreme? Wasn’t there a gentler way for it to inform me of my error? After all, I was approaching my task of examining the perimeter of my 50-acre farm in total sincerity, from the depths of my heart.

The truth is, the warnings and communications were coming more gently; I just wasn’t able to hear them yet; I needed more experience and training. So the elementals finally delivered a message that I couldn’t help but be aware of.

The whole incident—comical in retrospect—reminds me of my favorite parable: A seeker found a guru with whom he felt great affinity and bonding. He became a renunciate, giving up his whole lifestyle and all of his worldly possessions, with the exception of a scant few necessary articles of clothing and his donkey. However, when he was finally ensconced in the guru’s ashram, he noticed that his donkey was becoming more and more intransigent every day. He tried everything he could think of to get it to do what he wanted. He coaxed it with sweet words. When that didn’t work, he tried threats. Then he went to bribes with treats. And finally, he resorted to kicking the animal. At last, he simply gave up and went to his guru, pleading for help. The guru chided him for his foolish methods, explaining that the only way to gain the donkey’s cooperation was to treat him with love. “Come,” said the guru, “I will show you.”

So the two went to the donkey, and immediately, the guru started looking around until he found a huge piece of timber lying on the ground. It was so massive he could barely lift it, but he finally succeeded, and when he did, he brought it crashing down squarely onto the donkey’s head.

The seeker was aghast! “Master! Master!” he wailed. “What are you doing? You told me you’d gain the donkey’s cooperation through love!” “And so I will, my son,” replied the guru. “But first, I had to get his attention.”

We are all like that donkey! We go about life absorbed in our little, narrow worlds, usually unaware of the blessings and communications that are constantly coming our way. They are always benevolent, even if they appear to be destructive; even if they bring hardship and suffering. (We’ll discuss those issues more another time.) In my case, I was simply deaf to the assistance I was receiving, even though I was certain that I was understanding it.