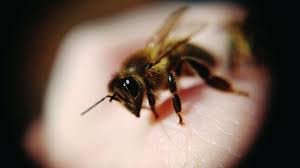 Last week I introduced the concept of the totem--the idea that an animal will appear and deliver a timely message. In that series of posts the animals were ants. This week, I have followed up with a series of posts about a bee behaving in an uncharacteristic fashion. When one thinks of totems, these are not the first creatures that come to mind. Hawks or eagles landing breathtakingly close. A wolf appearing out of nowhere and offering herself as the subject in a private showing. Or, as once happened to me during a camping trip in Colorado, three deer romping and playing with each other in the snow like puppies. Those are the kinds of sightings we most often associate with totems.

The fact is, anything and everything is a totem. This blog is about dreaming. We dream when we are asleep and are experiencing periods of REM (rapid eye movement). But as has been stated and exemplified so many times in this column, we do not stop dreaming when we awaken from sleep. The same metaphoric communication goes on without interruption our whole lives. At night, the casts of characters are images that we seemingly invent from our own imaginations. During the day, the casts change to images that are brought to us from "real" life. These latter images are made up of the things we see and experience as we go about the business of our daily routines.

But the process is identical. Even though it seems as if "real" life is more ordered and predictable, beneath the surface, it is an experience that is as surreal as the dreams we have during sleep. Whenever we need a message delivered to us, life presents us with an image. The image may seem reasonably normal and understandable--like stepping off a curb and being nearly sideswiped by a car. This kind of occurrence is common enough that, although it is upsetting, nevertheless, we know that it can happen.

At other times the images are truly bizarre and unexpected--like a bee stinging someone when the insect should be hibernating. All these experiences--with cars or bees or ants, or with anything--are the dreams we have when we're wide awake; they are our waking dreams which come to us as totems. And just as we can grab pen and paper and interpret the symbols of our sleeping dreams--the ones that we most often have at night--so we can do the same with our waking dreams. The messages will be equally powerful and equally poignant.
Posted by David at 19:37