A Dream About A Broken Cello 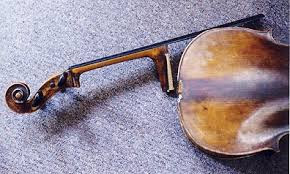 Those of you who read my blog on a regular basis know that, in my “day job,” I work with musicians. As a result, I often share dreams that musicians describe to me. This week, I am sharing one related to me by a young man in the unusual profession of being a violin restorer.

The dream of a violin restorer
In my dream, I was back working in the shop where I did my apprenticeship. We were experiencing one of those periodic moments of urgency because an instrument that had been left for restoration had been ignored. It was somehow my responsibility, so I had to get right to work on it. But it soon became apparent why this particular job had been set aside. It was a repair to the back of a cello, and the wood in the back had deteriorated so horribly badly that it had just turned into mush. Really, what needed to happen was that the back needed to be replaced with a new one. But this was an historic cello, and I knew the owners would never consent to a replaced part. So I decided that the only thing to do was to try and make the cello look OK, even though I knew it was never going to sound good.

There was one place on the back that had a huge indentation, and I started filling it with a transparent filler that we usually use only extremely sparingly. In this case, I was slathering it on in thick gobs. I was pretty sure I could make this look alright.

But then, I was at a staff meeting with the rest of the members of the shop, and they were all expressing their disapproval of what I was doing. I was defending myself, convinced that I could make this work, but they would hear none of it. I remember that they kept calling the filler “epoxy,” and I kept telling them that, no, it wasn’t epoxy. But I couldn’t remember the actual name of the filler. I went to a cupboard and tried to find the container so I could show them, but I couldn’t find it.

Oddly, after I woke up, I couldn’t remember the name of it then, either. It only came back to me after about an hour of being awake.

The metaphoric association with music and sounds
Sound is vibration. The entire universe is made up of vibration, so one possible metaphoric association with a cello might have to do with the dreamer’s own sense of being “in tune” with the universe that he functions in. If he “makes beautiful music,” that might imply one metaphoric message. In this case, however, he was trying to make the cello look good, even though he knew it would never sound good. That might send a different kind of message to the dreamer. It might have more to do with keeping up appearances than “vibrating” to the “tune” of his own life’s needs.

We’ll explore these ideas during the next week, and see what the dreamer, himself, has to suggest about it all.

On Wednesday (tomorrow) we’ll begin the process of analyzing the dream.
Posted by David at 10:11