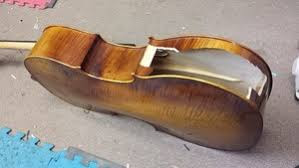 This week, we’re examining an unusually long dream about trying to fix a broken cello. The dream is of interest because it is about sound, and the concept of sound has a particularly important metaphoric implication. Sound is vibration, and vibration is a vital building block of the universe.

Today, we have isolated the dream’s symbols, and I've asked the dreamer to “tell me about” each one.

Tell me about…
* Working:  Earning my keep; doing what I do to contribute and pay my dues.
* Shop:  My place of business, and in this case, where I learned my craft.
* Apprenticeship:  My schooling.
* Moments of urgency:  We had to take note and address an issue that we had allowed to languish.
* Instrument:  It’s a device used to make sound, hopefully in a beautiful way.
* Cello:  Although it can certainly go high, it’s most known for a deep, resonant quality of sound.
* Sound:  Vibration. It’s one of the key elements in our living. We use it for untold numbers of things. It can either uplift, or be pragmatic, or it can be destructive.
* Restoration:  Being renewed so that it’s useful and beautiful again.
* My responsibility:  The burden and task was on my shoulders; I was the one who had to make good on the job.
* Get right to work on it:  I had to begin immediately.
* Back of a cello:  It’s the piece of the cello that reflects the sound vibrations out into the air. It’s really the main amplifier.
* Wood:  The natural, organic material that the cello is made of.
* Deteriorated:  It had become rotten over time.
* Turned to mush:  It had no substance.
* Replaced with a new one:  Ideally, we needed to get rid of the rotted material and put something stronger with more integrity in its place.
* Historic:  People give it value because of its age—it’s like veneration.
* Owners:  The people who were responsible for making the final decisions.
* Make it look OK:  This was an expedient shortcut which really would only solve part of the problem. As long as no one tried to actually use the cello, it would give the appearance of being alright.
* Never sound good:  It would be disappointing if anyone ever attempted to use it for its intended purpose.
* Huge indentation:  A place that had suffered in a particularly prominent way.
* Transparent filler:  It’s used to help disguise damage and to make things look nice.
* Used sparingly:  You try not to use it any more than you have to.
* Slathering on gobs:  I was using it in an excessive way.
* Staff meeting:  Putting our heads together.
* Disapproval:  My methods were unorthodox and, frankly, questionable.
* Defending myself:  Trying to justify my approach.
* Epoxy:  That’s a glue that we would never use on a cello.
* Couldn’t remember the name:  I didn’t know what to call it.
* Cupboard:  Where we store supplies.
* Couldn’t find it:  It was missing, probably in use.

Initial thoughts
While we won’t know for certain until we discuss the dream with the dreamer, there’s an element in the symbolism that seems to be about maintaining appearances without addressing a problem that is keeping the cello from being used for its intended purpose.