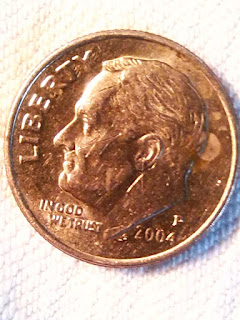 A lighthearted waking dream about finding dimes in odd locations delivered an unexpectedly poignant message to the dreamer. It began by pointing out to the dreamer that, in her current state of consciousness, her “energy was spent” and she had “nothing left to give.” The dream suggested that she had built up a number of structures which she no longer needed and were acting as an encumbrance.

Then the dream described a “storm brewing inside” that she was going to have to manage on her own. This seemed overwhelming to her, but she found a “currency” that was all about “change.” It was going to help her make the change by turning “on a dime.” The dream emphasized how important it was for her to take advantage of this currency, because it was “unsecured.” If it was lost, there was no way to get it back. Neither was it going to do everything for her, but it would assist her about 10%.

She found this “currency for change” at the entrance to her own inner environment. She also found it in association with her inner maintenance and grooming. And she found it perched precariously in the arena within herself that has to do with how she appears to herself in her own inner world. As precarious as this currency for change was, it made certain that she “would see it.”

My thoughts
What a profound dream!

At first I suggested that maybe this “currency for change” was going to help her even more than she anticipated. She kept finding it in different arenas within herself: 10% here, 10% there. Added together, it was going to add up to a much greater assist than it might seem to begin with. I asked her what she made of all this.

The dreamer comments on her own experience
I have to say, this is remarkably autobiographical. I have been experiencing a lot of changes and growths inside myself. But even if you look at the real-life hurricane outside myself that went roaring through my property, that's a waking dream. Now, in retrospect, I can see that it didn’t do as much damage as I had feared. What’s really funny is that I kept finding dimes even after we talked and even after the storm had passed.

But yes, there are big changes taking place inside of me. Or maybe it’s more accurate to say that I am becoming aware of the changes that had already been made. And I like the part in my dream about too many structures. Actually, it’s a bit confusing at the moment. When you live your whole life following one concept of how the universe works, and then suddenly, well into adulthood, you discover that there is a whole different way of viewing life, that can be overwhelming. You have to make a shift, and sometimes I find myself living in the old construct, and other times, I move into the new one. I don’t know. Do you ever pass completely away from the old way of looking at life? Maybe not. But there’s no question about it, I am understanding my life from a radically new perspective these day.