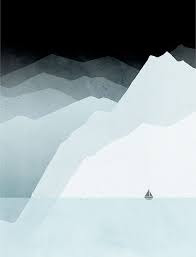 Many dreams make some sort of logical sense in and of themselves. Sometimes, they can even seem so real that the dreamer wonders if they are intended to be taken literally. Then there are others that are little more than nonsense from beginning to end.

In both extremes it is a mistake to try to understand them from the perspective of logic. However, if one takes the trouble to “translate” their imagery from metaphor to common language, both kinds of dreams can have important messages to impart.

This week, we’re going to work on a dream that was illogical and baffling to the dreamer. You will soon see why:

A weird dream
I don’t quite know how to describe what I was looking at except to compare it to two king-sized beds placed side by side so that they are touching. That’s about the size of the area I was looking at. It was a horizontal plane—like the surface of a huge bed, and it was about the height of a typical bed—maybe slightly above the knee. It was also white—a smooth white surface. But on this surface were numerous white jagged shapes. They looked as if they had been cut out of foam board, and they were placed vertically all over this smooth surface—like dozens of miniature mountain peaks, about a foot to 18 inches high. Somehow you could read them and interpret them.

There was a guy there whose job it was to “read” and interpret the jagged peaks and say his interpretation out loud while he was doing it. But instead of saying anything that you could understand, he was uttering guttural, throaty sounds as his eyes scanned all these peaks. He made really animal, non-human sounds until he got to the last three peaks. That’s when he said, three times in a row, “Tee-yorn, tee-yorn, tee-yorn.”

Everyone was shocked. They knew he had made a mess of things. And at that point, a man emerged from under this structure—as if he had been lying under a bed. I knew that he was the mayor. And what was striking was that he was heavy-set, and was wearing nice, grey clothes—not white like the rest of the scene. He brushed himself off, and simply left the room. Then he returned, and two more men—tall and skinny—also emerged from under the structure. The three of them seemed to have a working relationship. They shook their heads in disgust and disbelief, and they all left the room.

Initial examination of the dream
Wow! What does one make of such nonsense? At least there is some sort of a loose plot, and there are distinct images. The idea of reading a secret code is not so farfetched. And a mayor implies authority. So, again, when one pulls away from the literal imagery of the dream and looks at the images as metaphoric communications, things seem less bizarre. Stay tuned!