A Waking Dream About A Smashed Windshield: Concluding Post 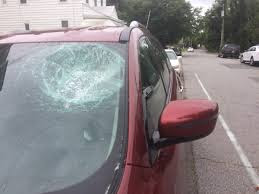 During a trip to the coast, something smashed the windshield of the car my wife and I were driving. We dealt with the experience as a waking dream, and we each decided to interpret it separately, then compare notes.

We chose to start with my interpretation because I was the principal “victim” of the event; the rock hit the car’s windshield right in front of me on the driver’s side.

In my dream restatement, which you can read by scrolling down to my last posts, there is a clear progression of ideas. The beginning describes “congestion” due to “construction work” going on inside of me. It all transpires smoothly until an “ossified” part of me tries to go in a “counter” direction.

For me, this was a clear description of my own ambivalence toward a new direction in my life. My chief occupation is changing, and in its place, I am building a practice of interpreting dreams. Although I’m excited, there’s a part of me that is questioning whether this is a wise move. Yet the ambivalence inside of me has been so subtle that I wasn’t really aware of it. It took the unpleasant experience of this jolting waking dream to bring it fully into my conscious mind. That’s when I was able to deal with it and put my nervousness to rest.

My wife’s version of the same waking dream
But what about my wife? She, too, was in the car when this happened. Did she have the same understanding of this incident? Like me, she is in transition in her life, and when I told her my dream interpretation, she readily identified with it. But then she added something so poignant it caused us both to stop short and take note:

“Whatever you send out into the universe eventually comes back to you. We—meaning you and I, but also meaning our entire nation—have been in a state of unrest over national events and politics. Many of us have been sending thoughts out into the universe that are pointed and ugly. That is an old pattern. It consists of time-worn, ‘crystalized’ attitudes, and it runs ‘counter’ to what we know is the highest spiritual perspective. Anyone not trying to live a spiritual life may be able to engage in that kind of behavior and not pay an immediate, steep price. But in our case, our crystalized, ossified thoughts that run counter to the direction we are trying to build, came right back at us. Had we not been protected, we would have paid dearly. So I guess the message is that it’s time for us to quit sending that stuff out into the ethers—unless, of course, we like getting our windshields smashed with big rocks traveling at 50 mph.”

Whoa! That was food for thought! And so pertinent.

Here are two people, both of whom experience the same waking dream and come up with valid but distinctly different interpretations. For me, the foremost thoughts in my mind were about the new direction in my life. For my wife, her thoughts have been keenly focused on national affairs. The same dream advised us both equally and poignantly. Amazing!