Three Visits By a Raccoon 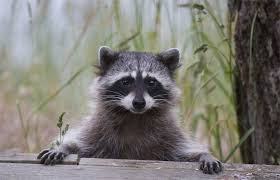 How do waking dreams work? Are they normal events that we simply read our own issues into? Or is there really some connection between the conflicts we wrestle with internally and some cosmic external force that watches us from a distance, then offers us advice and guidance?

Here's an example of the former theory: There is a chocolate cake in the display window of a bakery. The first person to see it is a real "chocoholic" and associates the cake with a kind of elixir that brings exquisite pleasure. But the second person to see the cake has a severe allergy to cocoa. It causes hives to break out all over her body, and it affects her breathing. She associates the cake with poison, to be avoided practically on pain of death.

In neither of those examples does the cake change. It is an inanimate object and stays static. It is the associations that these two people make that cause them to have their extreme reactions to it.

Now let's look at the second theory: If I were to ask a Native American if there was external involvement on the part of the universe, there would be no hesitation in his or her reply. "The Great Spirit" comes to us in the form of animals--totems--whenever the animal has a message to deliver us from the cosmos.

We're going to explore those two theories this week as we analyze a delightful waking dream told by a dreamer in my online dream class.

The camping trip waking dream
I guess I don't much like camping. I know that now. But I didn't when I agreed to go with my friend who claimed she knew what she was doing. As it turned out, she didn't. We set up the tent in an isolated area of the campground and then lit a campfire in the pit. I was sitting at the picnic table, enjoying the fire when I looked up and saw an alarmed look on my friends face. She was looking to my left. I glanced over in that direction, and there, on the picnic table, not three feet from me was a raccoon. I jumped, made some noise and it went away. That was our first night. Later, we were told that, as a bonus, we would be allowed to stay a night longer than we had paid for. The camp manager also invited us to have supper with his family. So we went. And while I was sitting in a fold-up chair, the manager looked under my chair and said, "That's amazing. I've never seen that before." Again I looked, and there, under my seat, was the same raccoon. Again, it took off. We were a bit spooked, so the manager took us back to our tent in his golf cart, the whole time shining his flashlight around. That night, I was just falling asleep, when my friend started screaming. It woke me up. She told me that the raccoon was right outside of the tent and was trying to push its paw through the material, right where my head was. Again, it went away. I went back to sleep, but my friend was so freaked out, she didn't sleep at all that night.