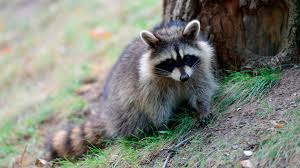 We have been looking at a waking dream that occurred when a woman went on a camping trip. While at the campsite she had three unlikely encounters with the same raccoon. In each case the animal seemed to be interested only in her.

Yesterday, we retold the dream as metaphor. That revealed a dominant theme throughout: There is a sense of fearfulness that inhibits the dreamer making friends with her own ability to hold “things that I want and need.” To “bring food to my mouth” (metaphorically). To “love and give comfort.” These are “vital tools that I need to utilize constantly.” Every time this part of her would try to approach—even trying to get near her “center of spiritual connection to the universe,” she would become alarmed and push it away.

She and I discussed this dilemma, and she readily admitted to her nervousness about trusting the intuitive side of her nature. In her own words, “I can be willful, and I have a hard time telling the difference between my willfulness and my voice of intuition.”

Describing our discussion would take up at least another blog post, so we will abbreviate and leave it here; there are other questions of interest that I posed this week, and it is time to address them: Generally, how do waking dreams work?

First, did the dreamer project her own attitudes onto the neutral environment around her? There is definitely evidence of that in this dream. The dreamer, while readily admitting that she knew nothing about raccoons, described them as “cute” and “lovable.” Anyone who raises poultry or water fowl would take instant issue with that description. Raccoons have that black “mask” around their eyes which seems appropriate, because they are referred to as bandits or thieves. They are expert raiders and filchers. And if a dog tries to confront one in a fight, the dog almost always comes away the worse for wear.

So the answer to the first question is, yes. We do, indeed, project our own attitudes onto the environment around us, and those attitudes greatly influence the content of our waking dreams. Metaphorically, this dreamer turned her raccoon into a spiritual entity which was trying to approach her “center of connection to the universe.” Powerful stuff! And it was also accurate as a description of the dreamer’s current dilemma.

Second, is there more? Does the universe actively participate in the creation of waking dream symbols?
While this question is much more difficult to answer definitively, it has been my experience that the answer, again, is yes. In the case of this dreamer, a raccoon that she had never encountered in her life made a specific effort to come directly into contact with her. This happened on three occasions in two locations, and with other humans present whom the raccoon simply ignored. Was this a coincidence? If it were an isolated event, I might think so. But over the years, I have witnessed or heard described to me hundreds of instances where something or someone acted in an unusual way which created a set of dream symbols designed specifically to address an issue relevant to the dreamer in that moment.
Posted by David at 11:12