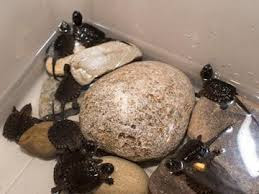 All week, we’ve been following the narrative of a farmer in Massachusetts who is also an inventor. While most of his inventions have little marketability, he did come up with a design for a gadget that he thought had appeal. But he felt anxiety about investing money and time into a project that clearly had risks. Then, while he was tinkering with his invention in his barn/workspace, he looked out the window and saw a female snapping turtle laying dozens of eggs right in the middle of his driveway.

The farmer/inventor analyzes his waking dream
This was about me and a turtle. For me, I slowly, ponderously came up with an invention. With equal deliberation, I brought a series of progressively-honed prototypes into existence. Even as I worked, I had doubts about the invention’s ability to survive and prosper. For the turtle, there seemed to be a mirroring of what I was doing: She was the female, giving birth to her children. In my case, it was a “brain child” I was birthing. Her process was slow, deliberate and exhausting for her. Mine was, too. The incubation period for her was long, and she seemed to lose interest after she was done with the initial work. I totally identified.


But her process took less time than mine. I watched as her eggs turned into babies. At first they seemed stillborn. But then came to life in an amusingly chaotic way. Finally, my daughter and I set them loose in their natural habitat.


All that happened in a relatively short time. But my invention would clearly take longer to do whatever it was going to do. So the question for me was: Is it appropriate for me to use the turtle’s experience as a prophesy? Would my invention continue to go through the steps I had witnessed with her birthing process? Would my gadget at first seem to be “dead,” and then come to life in a prolific, chaotic and amusing fashion. Would I be able to successfully shepherd it into its natural environment, admittedly, with some intense steering along the way?


I wasn’t foolish enough to rely on this turtle experience exclusively, but I did find, over the next weeks and months, that the memory of the turtle’s quiet presence helped buck me up when I started to feel hopeless.


That incident was two years ago. This is what has happened to my invention since: I started trying to market it with no success. Other than an occasional friend or acquaintance, I couldn’t get anyone to pay attention to it at all. Then, on a fluke, I happened to be talking to a buyer for a hardware store chain. He saw what I had made and took an immediate interest. The chain repackaged it and presented it in its stores. It is now starting to sell in significant numbers. Amazing!


If you enjoy these posts, please feel free to leave a comment.
Or, follow the discussion uninterrupted.
Scroll down to the bottom of this page to learn how.