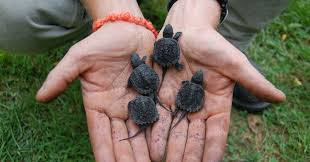 Today we’ll conclude the waking dream story of a farmer and inventor who encountered a female snapping turtle laying eggs in his driveway. Scroll down to my last two posts if you missed the beginning.

The story of the snapping turtle concluded
I continued digging and was mostly amazed at how many eggs had turned into baby turtles—easily 50. It seemed to make the loss, not only of the turtles themselves, but of the whole symbolism of the “offspring” of my invention all the more upsetting.

As I dug, I would occasionally peek into the bucket to see if anything had changed. Nothing had; the two or three turtles that I had put into the water were deathly still. Then, as I was almost finished digging in the nest, I thought I caught a glimpse of movement in the bucket. I was sure I had either made it up or had somehow jostled the bucket and caused it myself. But as I looked, there was definitely a lethargic motion on one fin of one turtle.

My spirits instantly rose in hope. Now another fin on a second turtle started to move, and the first turtle became more active. They were alive after all! I let out a shout and started madly putting all fifty-plus turtles into the bucket, filling it with more water. Within an hour, it was pandemonium with scores of babies swimming around. I was elated.

I knew that we had to get the babies to the Connecticut River, but not before my teenage daughter and I spent some time holding them and watching them in action. Then the two of us drove down to an estuary where there was a sandy beach. We had both seen nature programs on TV where the turtles on an ocean beach hatch and then instinctively make a parade-like beeline for the water. We expected the same, so we were surprised and highly amused when fifty turtles all started heading in fifty different directions. Eventually we got them all turned around the right way and shepherded them into the water. It was a happy moment full of laughter and the sense of having helped Mother Nature just a tiny bit…

What this incident means as a waking dream
This farmer/inventor/waking dreamer was so in tune with the dream concept that he needed no help from me. I simply let him talk and give his own analysis, which follows.

The dreamer continues his narrative.
There was such joy and celebration that I kind of forgot the significance of the incident as a dream. It actually took a couple of days and me back in my workshop, tinkering with my invention. That’s when I started to ponder the implications of this whole event: I slowly, ponderously came up with an invention. With equal deliberation, I brought a series of progressively-honed prototypes into existence. Even as I worked, I had doubts about the invention’s ability to survive and prosper.

If you enjoy these posts, please feel free to leave a comment.
Or, follow the discussion uninterrupted.
Scroll down to the bottom of this page to learn how.
Posted by David at 13:26