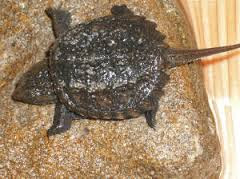 Today we’re continuing the waking dream of a farmer and inventor who encountered a female snapping turtle laying eggs in his driveway, far from water. Scroll down to my last post if you missed the beginning of the story.

A farmer/inventor’s prophetic waking dream continued
With the eggs protected both by electric fencing and an actual cinderblock structure that I built around the nest, there was only one thing to do: sit back and wait. The agriculture department had told me that it normally takes about 3 months for the eggs to hatch. So this castle-like structure—right in the middle of the roadway—was going to be staying there all through the summer and the busiest part of the farming season. It was really funny watching all the vehicles steer around this contraption, slowing down as if the noise from the equipment might disturb the incubating turtle eggs.

While I waited, I also pondered this whole event from another perspective. I had just finished reading your book, Always Dreaming, and my turtle certainly qualified as an important waking dream under two of the categories you discuss. First, she was the key player in a weird, unprecedented event in my life; this had never happened in the 18 years that we had been living on the farm. And second, it involved an animal—one that even journeyed out of its habitat to make an appearance. You discussed these kinds of events in your section on animal totems, and how they can appear as messengers when they are needed.

To me, the timing perfectly coincided with my new invention, and my related concern that I would put in all this effort and money into my project, only to have it fail. The turtle—slow, but methodical and deliberate—producing multiple offspring right in front of the window of the room in my barn where I was doing my designing, was such an obvious symbol I couldn’t ignore it. As you can imagine, I awaited the baby turtles with some anticipation.

My family and I counted off 90 days and then watched expectantly, but nothing seemed to be happening. After about 105 days, I started getting nervous and decided that maybe it was time to intervene. I gently and carefully dug into the nest. Sure enough, there were scads of baby turtles in there—all lying absolutely still. Some of them were in the transparent eggs, still, but most of them were just lying there. Even when I picked them up, they didn’t move. I wondered if there had been some kind of weather event that had killed them all. My spirits were crushed, and I started to become despondent.

Not knowing what to expect when I started digging, I had brought along a bucket of cold water, and just on a whim, I put a couple of the baby turtles into it. Nothing. I kept digging, hoping that I’d find one or two that were alive.

To be continued on Friday.

If you enjoy these posts, please feel free to leave a comment.
Or, follow the discussion uninterrupted.
Scroll down to the bottom of this page to learn how.
Posted by David at 10:22