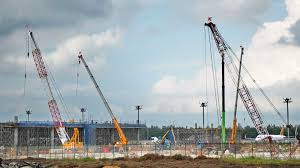 A dreamer attended a dream class feeling dejected because her recent dream experiences had been less vibrant than previously, and she was feeling uncharacteristically indifferent about dreams in general. Nevertheless she remembered a dream about having a flight canceled because the airport was under construction. In her dream, she ended up helping other people get to their flights.

The “Tell me about it” prompt
Last time, we isolated the symbols. Now it was time to see what we could learn about their metaphoric meanings. To assist with this, I like to start with the neutral prompt, “Tell me about it.” The idea is to learn what each symbol represents to the dreamer. A symbol’s meaning will be influenced by the dreamer’s own experience. For example, a house often symbolizes “where we live” in our thoughts. But a person who is in a happy marriage will have a very different attitude about her house than a person who is being abused at home.

Tell me about…
*  Airport:  It’s where you go to begin a long trip
*  Take important flight:  I needed to get somewhere
*  With group of people:   I wasn’t alone
*  Five or six: I was with a small group
*  Following me:  Somehow, I was the leader
*  Check-in counter:  It’s where you get your ticket confirmed
*  Flight canceled:  My trip was stopped—hopefully temporarily
*  Airport under construction:  They were improving and rebuilding the airport
*  Terminal torn apart:  Everything was taken apart to be rebuilt
*  Half-finished concrete posts:  They were building new supports
*  Rebar:  Added structural strength
*  Chaos and debris:  Disruption
*  Affected only my flight:  I was the only one not traveling
*  Rest of group can make connections:  Everyone else was OK
*  Confused:  A sense of bewilderment
*  Found myself helping:  Since I wasn’t going, I made sure others were on track for their trips

Rebuilding the dream as a metaphor
Now it was time to retell the dream replacing the original symbols with the dreamer’s own descriptions of them. At the same time, we would add phrases, such as “There is a part of me,” to remind the dreamer that every symbol in a dream is a part of herself:

There is a place within myself where I go to begin a long trip. I need to get somewhere inside of me. I’m not alone; I’m with a small group of my own aspects. But somehow, I’m the leader. I go to the place where my ticket is confirmed, but I learn that this trip within me has been stopped—hopefully temporarily. I’m improving and rebuilding this part of me. Everything in this aspect of myself has been taken apart to be rebuilt. I am building new supports with added structural strength. There’s disruption. I’m the only one of my aspects not traveling. Everyone else is OK. But there’s a sense of bewilderment, and since I’m not going, I make sure the others are on track for their trips.

This dream delivers a clear, specific message to the dreamer!  (More tomorrow.)

If you enjoy these posts, please feel free to leave a comment.
Or, follow the discussion uninterrupted.
Scroll down to the bottom of this page to learn how.
Posted by David at 08:37