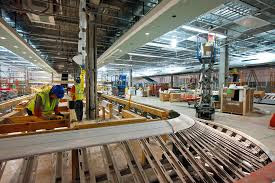 A dreamer was frustrated that she seemed to be losing her long-held interest in dreams. But she did have one dream—partly lucid—about an important flight being cancelled due to airport construction. You can scroll down to my last posts to see how we arrived at the following metaphoric restatement of her dream:

Metaphorically restated airport dream
There is a place within myself where I go to begin a long trip. I need to get somewhere inside of me. I’m not alone; I’m with a small group of my own aspects. But somehow, I’m the leader. I go to the place where my ticket is confirmed, but I learn that this trip within me has been stopped—hopefully temporarily. I’m improving and rebuilding this part of me. Everything in this aspect of myself has been taken apart to be rebuilt. I am building new supports with added structural strength. There’s disruption. I’m the only one of my aspects not traveling. Everyone else is OK. But there’s a sense of bewilderment, and since I’m not going, I make sure the others are on track for their trips.

Analysis
The message is clear: The place inside of this dreamer where she “takes flight” is under construction. It is being improved and strengthened. Consequently, her planned “journey” has been temporarily interrupted. But this is only true for the most direct of her “flights.” The rest of her—in the background—is still on schedule for departure, and she is assisting.

No wonder she seems to have lost interest in her dreams! She is undergoing major internal work. She is in the middle of a transition, and the dream is reassuring her. She can relax and enjoy the temporary respite, because after she regroups, she will quite probably be more active and compelled than ever.

An overview
The messages delivered by most dreams are descriptions of the internal problem being experienced. For example, if a dreamer is in denial, he might dream of an ostrich with its head in the ground. If a dreamer is excited by a sudden burst of new ideas for a project, she might dream of being, literally, on fire. In both examples the dream provides a “state of the union” assessment of what the dreamer is experiencing in his/her own psyche.

What is notable about the airport-under-construction dream is that the message is not a statement of the dreamer’s dilemma. If that had been the case, the dreamer might have dreamt of being stuck in quicksand or “mired” in some other way. Instead, her dream offered her an overview of the current state of her psyche. The fact that she felt frustrated and out of touch with her usually-enthusiastic preoccupation with dreams was not stated at all. Instead, she was given a vivid picture of why she was feeling out of sorts. Unlike many dreams in which the dreamer is being shown a conflict or an inconsistency that needs resolution, she was being told to relax and enjoy!