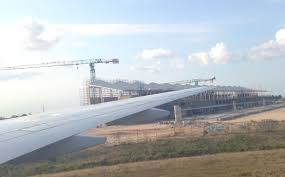 We’re examining a dream about an airport under construction. The dreamer who had this dream often dreams lucidly, but she also understands the value of symbols. In this dream she was trying to deal with her symbols while her dream was transpiring. She was using a technique suggested by lucid dreamer, Robert Waggoner. He recommends asking the question, “What do you represent to me?” to each of the individuals a dreamer encounters in a dream. Our dreamer wanted to do this, but as is often the case in lucid dreams, the dreamer’s focus and concentration were not as strong as she needed them to be. As an alternative, I suggested that we work with the symbols during class. This was the traditional way of dealing with symbols after the dream was over.

It helps to know that this dreamer was feeling a bit down because most of her recent dream experiences had been less vibrant than in the past, and she was feeling uncharacteristically indifferent about dreams in general.

Her airport dream
I was arriving at an airport, getting ready to take an important flight. I seemed to be with a group of about five or six others who were following me. When we got up to the check-in counter, I was informed that my flight had been cancelled. This was due to the airport being under construction. That’s when I looked around and saw that the whole terminal had been torn apart. There were half-finished concrete posts with rebar sticking out of the top, and the usual construction chaos and debris all around. But apparently, this only affected my flight. The rest of my group was still able to make their various connections. But they were confused due to the construction disruption, and I found myself helping them to make sure they made their flights.

Isolating the symbols
The first step, as always, was to isolate the symbols. The technique for this is a little bit like taking shorthand. Imagine that the dreamer is telling the dream in class and that you are taking notes so that you can read the dream back to her. You write down the most important words, and your notes become a kind of outline. They might look something like this: Airport, take important flight, with group of people, five or six, following me, check-in counter, flight canceled, airport under construction, terminal torn apart, half-finished concrete posts, rebar, chaos and debris, affected only my flight, rest of group can make connections, confused, found myself helping.

More about technique
Notice that, in the shorthand version immediately above, I used only words that the dreamer had used. That’s really important. When dreamers tell their dreams, they are still participating in a kind of conscious re-enactment of their dream experience, and their words are more than descriptions. These words trigger a subconscious identification as well. That will become important later and must be respected.

We’ll work with her words in detail in my next post on Friday.