A Dream About Airport Construction 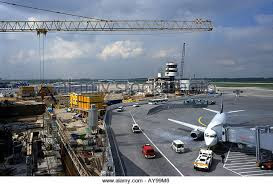 Those who read this blog are familiar with the idea that dreams highlight internal conflicts. Dreams often describe dilemmas we are experiencing at any given moment. Typically the conflicts are ones within us that we are unaware of. Sometimes we know about them but have not focused clearly on a solution. By metaphorically holding a mirror up so that we can see ourselves from a slight distance, dreams allow us to take a more objective look at the problems we are facing. They often imply a resolution—or the resolution becomes obvious because we can see the issue more objectively.

And sometimes dreams present the resolution directly. That was the case with a dreamer who attends a dream chat group that I participate in. She is an avid dreamer—often dreaming lucidly. One evening, however, she told us that she was feeling out of sorts. Somehow she was having fewer dreams, and when she remembered them they seemed less compelling to her. She was afraid that she was losing interest, perhaps even losing her ability to dream in such a way that she recalled her nighttime experiences. She wondered what was going on. When we asked if she had been remembering any dreams at all, she replied that there was a recent one that she recalled fairly clearly:

Her airport dream
I was arriving at an airport, getting ready to take an important flight. I seemed to be with a group of about five or six others who were following me. When we got up to the check-in counter, I was informed that my flight had been cancelled. This was due to the airport being under construction. That’s when I looked around and saw that the whole terminal had been torn apart. There were half-finished concrete posts with re-bar sticking out of the top, and the usual construction chaos and debris all around. But apparently, this only affected my flight. The rest of my group was still able to make their various connections. But they were confused due to the construction disruption, and I found myself helping them to make sure they made their flights.

Initial impressions
To me, there was an obvious theme to this dream. The cancellation of a flight was possibly a metaphoric statement of her “grounded” feeling. And if that was true, then the idea that the plane wasn’t getting off the ground because the airport was under construction was a really positive message. There were things being “built” and “improved” inside of her, and this was leading to a delay in her “flights.”

As I said, she dreams lucidly, and she was working on a technique suggested by author Robert Waggoner: In the middle of your dream, you ask the characters who you encounter what they represent to you. She had been trying to do this, but had not succeeded. I suggested to her that nothing was lost; we could go through the steps now. She agreed, and we will follow her through the process.