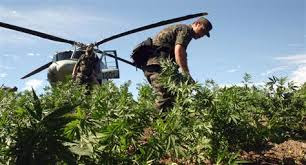 I’ve begun examining a waking dream about a police helicopter raid on a marijuana growing operation. As a reminder, a waking dream is an unusual—often disconcerting—experience that occurs during one’s waking hours. In this case “the dreamer”—who is a trained midwife—offered a lengthy account of the event which you can read in its entirety in my last post. What follows is an abbreviated version which I will analyze as if it were a traditional dream experienced during sleep.

The waking dream summary
“… I decided to take a job as the fore-woman/manager of a large marijuana growing operation in Sonoma County. I had a staff of several workers, and things were going well. But one day, I looked out and saw that the pump house for our well was on fire. I started yelling at the crew to help me put out the fire. Just as I was getting everybody together, I looked up and saw that there were state police helicopters about to land.…We were trying to put out a fire, but I needed to make sure the whole crew was together so that no one got hurt or implicated in the police raid. For a while, it was pandemonium with flames and choppers and people yelling and panicking…no one got arrested. The State Police just made sure the well was put out of commission. They took our names, gave us a warning and then let us go…But I was out of a job.”

The important symbols
Due to the length of this dream, we will deal with only the most important symbols: fore-woman/manager, crew, marijuana, pump house, fire, state police raid, helicopters, pandemonium, out of commission, warning, out of a job.

The metaphoric meanings of the symbols
It was time to ask the neutral question(s) that would help the dreamer understand the metaphors of her waking dream. Although I often expand on the question to assist the dreamer, I tend to start with, “Tell me about it.”

Tell me about…
* Fore-woman/manager:  I was the one in charge.
* Crew:  My helpers.
* Marijuana:  Medicinally, it’s a painkiller. Recreationally, it just zones you out.
* Pump house:  It protects the water well. It’s important because without water, you can’t grow marijuana—or anything.
* Fire:  Destruction through heat and flame.
* State police raid:  They wanted to stop us from using water during the drought. They were trying to protect a scarce resource.
* Helicopters:  The easiest way to get to us—faster and fewer barriers to deal with.
* Pandemonium:  Confusion, fear, disorganization, scattered impulses and actions.
* Out of commission:  No longer functional, dead in the water.
* Warning:  Nobody was punished, just told to stop. We got off easy.
* Out of a job:  Unemployed, no source of income.

Reassembling the waking dream
Even abbreviated, this is a long, powerful dream. The next step will be to reassemble the dream using the metaphoric descriptions in place of the original symbols. We’ll tackle that in my next post. Stay tuned!