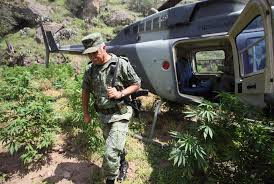 Those who read this blog on a regular basis know that I work with unusual events in waking life exactly as if they were dreams. I call these events “waking dreams.” Like traditional dreams, waking dreams contain metaphoric messages that are designed to communicate information of importance to the person experiencing the event. Sometimes these events can be dramatic. That is the case with the waking dream I will be analyzing this week. This waking dream took place a few months ago in Northern California. The “dreamer” is a trained midwife.

The dreamer’s account of what happened
"Midwifery in the United States can be a pain. There are lots of restrictions and distrust in the medical community. That’s why there have been times—like now--when I have temporarily left the business to try other things. When I was younger I was pretty involved in the pot scene, so I know how to grow the stuff, and I decided to take a job as the fore-woman/manager of a large marijuana growing operation in Sonoma County. I had a staff of several workers, and things were going well. But one day I looked out and saw that the pump house for our well was on fire. I started yelling at the crew to help me put out the fire. Just as I was getting everybody together, I looked up and saw that there were state police helicopters about to land.

"Man! All this was going on at once. We were trying to put out a fire, but I needed to make sure the whole crew was together so that no one got hurt or implicated in the police raid. For a while, it was pandemonium with flames and choppers and people yelling and panicking.

"If you’re in the pot business you know that, for years, the State of California has turned a blind eye to growing the stuff. But we’re in a drought, and marijuana growing takes a lot of water. That’s why we got raided; the cops wanted us to stop using water. As it turned out, no one got arrested. The State Police just made sure the well was put out of commission—which it pretty well was anyway due to the fire. They took our names, gave us a warning and then let us go. The whole experience was so weird! But I was out of a job, that’s for sure."

The nature of waking dreams
Over the years, I have noticed that waking dreams start with a startling experience that is relatively benign. If the message goes unheeded, the ante gets upped. Eventually, if the message continues to be ignored, then the waking dream can turn into a chronic problem—often medical in nature. That’s when it is much harder to resolve. But in this terrifying, though amusing, marijuana waking dream, the midwife received an early, harmless warning. It was a wake-up call, and we’ll watch as she deals with it and gains important insights. Stay tuned!


If you enjoy these posts, you can follow the discussion uninterrupted.
Scroll down to the bottom of this page to learn how.