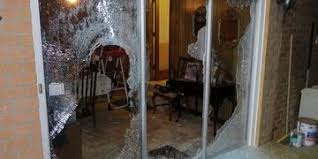 Dear readers, once again, I apologize for the inconsistent postings. My life is full of many activities at the moment, and I will have to write my posts whenever I have the opportunity.

A checker at my grocery store told me about an incident in her family where her two young sons, during a squabble, hit a sliding glass door with a magnet and shattered the glass.

The dreamer made metaphoric associations of each of the dream symbols, and now we have reassembled the dream in its metaphoric version.

The aggravating section threw the sphere-puller hard to get rid of it. Disposed of it. Then everything seemed to be over. The innocent section of me is young so it can shift on a dime. It found other things to do. There was no more energy expended. I took both sections to their place in me of learning.

That’s when I looked at the sacred, private place within me that I’ve just remodeled, and this is where I look out to see the view. It was destroyed in a violent way. I had no idea what had made this happen. Perhaps a prankster and interloper in me had wanted to do something malicious. The breakage was mostly on the interior.

I spotted the culprit; it was the sphere-puller. I consulted the partner and the authority figure in me. No one had tried to be bad or do something wrong. It’s part of the nature of young masculine energy in me. It doesn’t really know, yet, how far is too far. It was a silent event; there was no sudden alarm. I didn’t know if I should scold myself and express displeasure, or pretend it never happened, or let myself know, quietly, that I was displeased. But the upgraded and beautified part of me was in a state of disorder and chaos.

Initial thoughts
Even though the dreamer has had no prior contact with the concept of the waking dream, the themes that have emerged from her metaphoric associations are focused and clear: She is experiencing an inner conflict that has damaged the “upgraded and beautified” part of herself.

Since she’s a novice, it remains to be seen how she will react.
Posted by David at 15:58