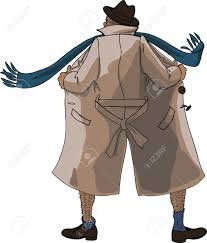 We’re examining a waking dream about a man flashing in his open doorway just before Halloween. The dreamer was certainly startled, but she also understood that there might be an insightful message from this poignant incident.

On Monday, she told what happened. Now it was time to begin examining the dream. That meant isolating the symbols, then asking the dreamer to comment on each one. It’s important for me to keep my own feelings and opinions to myself during this process, so I try to encourage the dreamer by using as neutral a prompt as I can think of. I usually begin by asking a dreamer to “Tell me about” the symbol.

Tell me about…
* Gone back to college:  I need some more education to be able to pursue the career I have in mind.
* My degree:  It’s really an acknowledgement that I have put in the time, effort and study to reach a certain level of competence.
* Taking some courses:  These are classes on specific topics designed to further my understanding.
* Short commute:  I can’t get the knowledge I need in my home , so I have to move a little ways away to an institution of higher learning.
* Look to my right:  I’m right-handed, so I would say that I was looking in my dominant direction.
* Doorway:  It was the main entrance into his house—his own sanctuary.
* Facing full front:  There was no sense of hiding anything, or of being underhanded or sneaky. Everything was there, exposed for all the world to see.
* A man:  Stereotypically, the man is the one in charge who goes out and makes a living and makes the most important decisions. It’s not true, of course, but that’s the perception.
* Stark naked:  Nothing hidden. And what I noticed particularly was that his genitals were huge.
* Genitals:  His potency. His reproductive, creative organs. They were enormous.
* Orange bucket:  A bucket is a container that holds stuff. The fact that it was orange made it stand out more, but it was also appropriate to the occasion, which is a time of potential mischief.
* Trick or Treat:  It’s a choice. It’s about either being satisfied by receiving something desirable, or being hoodwinked somehow.
* Wild emotions:  I was on a roller coaster of different feelings.
* Shock:  Stunned into inaction.
* Disbelief:  A kind of denial.
* Did anybody else see this:  I was looking for validation of my own perceptions.
* Disgust and amusement:  Frankly, it was really distasteful, but as such, it was also funny, and  definitely surreal.
* Jaded bewilderment:  I had a hard time fitting the whole incident into my sense of how life should be.
* Not overwhelming:  It didn’t put me into a crisis mode.
* Repulsive:  Unsavory, unpleasant, distasteful.

Some observations
Even though the original incident was ludicrous, from reading her replies, it becomes clear that there is an important issue being addressed.