Strange Use Of A Food Processor 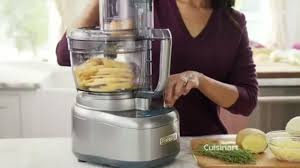 A woman who loves to cook had a dream about performing some strange tasks in her kitchen. They had to do with her Cuisinart food processor. She found the dream more amusing than disconcerting, but she also had a sense of its importance because she remembered it. This was an exception for her, because she usually has no dream recall. This dream occurred shortly before Thanksgiving. In “real life” she was the member of her family responsible for preparing the Thanksgiving feast. Food and cooking were definitely on her mind.

A dream about a Cuisinart
It’s really a short dream, but it was so vivid that the images stayed with me for days. In my dream, I was preparing for the Thanksgiving meal. I was standing in my kitchen, in front of the counter that my Cuisinart sits on. But my Cuisinart wasn’t normal size; it was huge. That didn’t seem to bother me, though. I turned it on and began preparing items to grind up and process in it. But they weren’t items of food. Instead they were really weird choices. First, I took a kid’s bathtub toy—a rubber duck—and ground that up. Then there was a stuffed rabbit. That got obliterated in my giant Cuisinart. In fact, I could see all the stuffing flying around inside the container. Finally, I took one of the dining room chairs and put that in the Cuisinart. I didn’t even bother to break it up; somehow, I just stuffed the whole piece of furniture in there in one piece. It seemed to get ground up just fine. And that’s when I woke up.

Isolating dream symbols
By now, readers of my blog know that I rarely accept a dream symbol at face value. As I have often repeated, symbols are metaphors, each one representing a quality or an issue that the dreamer is grappling with inside of him or herself. The first step in uncovering the dream’s message is to isolate those symbols so that they can be carefully and thoroughly examined.

I tell attendees of my dream classes that one excellent way to start picking out the symbols is to take dictation as the dream is being told. It is common for dreamers to be animated while relating a dream, so they are likely to talk fast. If a listener tries to record the dream while it is being related, he or she will only have a minimum amount of time to write it down. That means that only the most important words will be left on the page.

For example, the dreamer whose dream we are looking at this week, began by saying, “In my dream, I was preparing for the Thanksgiving meal.” A person listening to this narrative and taking notes in such a way that they would be able to repeat the dream after it had been told, would probably write down only three words: preparing, Thanksgiving, meal. Those words are certainly the important symbols that come to light in the first sentence. They are the first important symbols of this dream.

On Wednesday, we’ll go through the entire dream, choosing all the symbols in this manner. Stay tuned!
Posted by David at 07:12