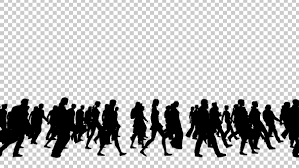 All week we’ve been examining a dream about a woman who is on the second floor of her parent’s home. As she looks out the balcony of her bedroom, she sees a group of people heading to a concert. Then she hears her mother calling her from downstairs. Her mother is anxious that she attend to her chores and not neglect them. At this moment in the dream, her sister hands her a pair of golden socks.

It was clear that the dreamer was being given a choice. I asked her about it.

The dreamer tells her story
Actually, if you look closely at the end of my dream, there is no choice anymore; it’s already been made. I’m in the group headed to the concert and I’ve walked past all the machines that do things by rote. So maybe I have, finally, outgrown those “Mommy messages” that have been such a powerful pull on me all through my life. Boy! I can’t tell you how I have resented all that stuff for so long.

I mean, let’s get real, here. My mother died a decade ago. You’d think I’d be free of her nagging after all this time. But no. It seems not. Maybe it’s because we start hearing those messages when we’re so young. And then, especially being a woman, they get subliminally repeated over and over again in our married lives and when we become parents. It’s so easy to fall into those roles. The next thing you know, you’re the one doing the cleaning and laundry and cooking, and chauffeuring the kids to their soccer games.

Don’t get me wrong; I love my family and adore my kids. But my youngest is now in college, and I find myself struggling to become the “new me.” That, of course, means tearing down the “old me,” and I find that harder to do than I thought. I mean, how do you just eliminate 50 years of habits at the snap of a finger?

David replies
I suggested to this dreamer that you don’t attempt to do it all at once. The best approach is to start small, with things that seem mundane and unimportant. As an example, I suggested that she give herself one hour a day that’s sacred. Take some of the time that used to be devoted to caring for children, and make sure she fills it with an activity or a study time that is all hers, and that she’s passionate about. I asked if there was an interest she had that she had always wanted to explore.

Dreamer
In college, I always wanted to be an antique appraiser. I’ve continued my studies whenever I had a moment. I guess I’m not too bad at it. I have friends in the business who keep encouraging me to get more involved. But I guess I’m pretty nervous about it.

David
I reminded her that the dream had already signified an inner shift. All she needed was to actualize the shift in real life. I asked if she’d feel comfortable asking her friends how she might become involved gradually, on a part time basis.