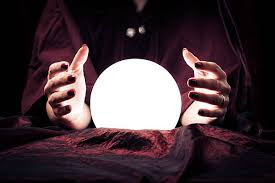 This week we’re taking a breather from dream interpretation to explore the nature of life, especially when life acts unpredictably. I began with the example of the composer, Mendelssohn, who wrote a piece of music that his sister also wrote independently. We are amazed at such synchronistic events because they don’t follow our preconceived—and faulty—notions of life being an objective experience.

The fact is, life often breaks the rules we impose upon it. We observe life and notice that, for the most part, it behaves in a certain manner. Then, we make the mistake of assuming it is supposed to behave that way. When it doesn’t, we decide that it is acting oddly.

So far this week, I've offered examples of shared experiences during waking hours (Mendelssohn) and during sleeping hours (my grandchildren). Here’s a third kind of incident: An individual with psychic abilities looks into her crystal ball and sees her neighbor’s car in a ditch. She tells her neighbor of her vision, but her neighbor is unimpressed and ignores her. A week later, the neighbor is doing errands and is in a hurry. She leaves her car running while she ducks into a convenience store to pick up a quick cup of coffee. When she reemerges, she sees that her car, which was on a slight incline, has rolled off the pavement into a gully. It will now necessitate a tow truck to pull her out. Clearly, the psychic had a prophetic vision. And assuredly, her neighbor will pay closer attention next time.

As a society, we tend to be in awe of such “unusual” phenomena. We find these incidents mysterious and humbling. And certainly, I would agree that, if you know someone who has accurate prophetic vision, it would be a good idea to take them seriously!

But there is another way to look at all of these events: They are metaphors designed to show the person experiencing them some facet of themselves. Why did they happen twice? Because the message that was being delivered was important enough that it warranted repeating.

Repeated dreams are a common phenomenon. If a dreamer is struggling with an issue in life, the conflict will be expressed through dream metaphor—almost invariable with the solution at least implied, if not overtly stated. If the dreamer does not manage to resolve the issue, the dream will come again. This can reoccur in any number of ways. The same dream message can be expressed using different metaphoric images, so that is seems as if the dreamer is having a “new” dream. Or the same dream can become repetitive. Or, as we have seen in the examples this week, the message can express itself through a combination of dream and “real life” imagery.

Announcement
I am starting an 8-week class in dream interpretation to be held in Springfield, Oregon. Click on the “EVENTS” page for details.
Posted by David at 11:15