A Dream About A Scratching Rabbit 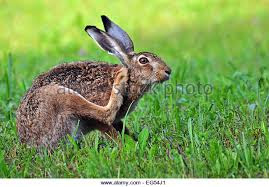 What do animals mean when they are featured in dreams?

For some animals, our associations remain reasonably consistent from dreamer to dreamer. For example, dogs are considered guards of the physical environment—“guardians of the four corners” as it is sometimes stated. Cats are often viewed as protectors of the psychic realms. In cultures like ancient Egypt, they were revered for their telepathic powers. Elephants are associated with memory; fish with negotiating the subconscious; birds with soaring into the heights.

Naturally, in all of these cases, it is still important to superimpose the dreamer’s own attitudes onto the above generalities. For every group of people that loves dogs, for example, there will be someone who is deathly afraid of them or repulsed by them. All of this enters into the process of understanding the dream metaphor; each case is specific to the dreamer.

But what if you dream about a hamster? Or a sea anemone? Or an iguana? Clearly, it is now essential to rely exclusively on the dreamer’s own metaphoric associations. By doing so, it actually improves the chances of understanding the symbol correctly. Whenever there is a preconceived idea of what a symbol means, there is the danger of superimposing a concept that comes from somewhere outside of the dreamer’s own consciousness. I am reminded of the dream I featured a few weeks ago involving a raccoon. The dreamer had never had any experience with raccoons, and when she was asked to “Tell me about raccoons,” her replies had little to do with reality. She described them as being soft, sweet and cuddly. Anyone who has had experiences with raccoons will understand the fallacy of that concept. But the dreamer’s replies were correct because they came straight from her own perceptions. That must always be the case when interpreting dreams.

This week’s dream involves an animal that could represent any number of metaphors. It will be interesting to learn what metaphoric association the dreamer, herself, has.

A dream about a rabbit
In my dream, it’s daylight, but I’m still in my pajamas. The PJs are flannel, and they have a blue and white pattern. Actually, all I see is one of my legs, so that’s the part of the pajamas I see, too. I know that I’m barefoot, but all I can see is my pajama leg. I’m outside on some kind of porch or deck and the weather is balmy—one of those perfect summer days—not too hot and just lovely—lazy and lovely. I’m lounging around with no pressures. Then I look, and there is a rabbit—mostly grey and fairly large. It seems unafraid of me. It is sitting right near my leg and it is scratching itself. There are really rapid motions with its back foot right behind its ear. I don’t pay much attention to it. But then I feel something strange. I look down, and now it is using the same paw to scratch me, and it is doing so aggressively. In fact, it has already ripped a hole in my pajamas, has scratched its way through my skin, and now my leg is bleeding. That’s when I wake up.