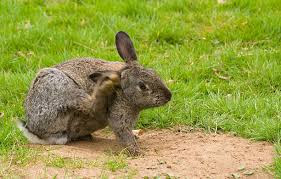 A dreamer had a dream about being scratched by a rabbit. Unlike dreams of dogs or cats where the symbolism is reasonably consistent from dreamer to dreamer, rabbits conjure up a variety of associations.

There is only one way to uncover the dream message, and that is to ask the dreamer, herself, what associations she makes with each of the symbols. I start by asking the dreamer to “Tell me about” each one. Her answers are below. As you read, notice that even symbols that seem relatively unimportant offer significant clues. The color and size of the rabbit, for example, produce descriptions that will have an important bearing on the final dream message.

Tell me about…
* Daylight:  The time when things are awake and there’s more activity.
* Pajamas:  What you wear when you sleep. But sometimes, if you’re lazy, you can keep them on during the day, too.
* Flannel:  Particularly soft and appealing. It makes you want to nestle right into the material and forget the world.
* Blue and white pattern:  No particular association with anything special. Just pleasant and non-descript.
* Leg:  It’s what I stand on, and what I use to move me around on. It’s my source of strength.
* Barefoot:  Really not quite up and running yet—no pun intended. Still unprepared to meet the day.
* Porch or deck:  A place to relax and enjoy the outdoor world without really involving myself in it.
* Perfect summer days:  Weather can sometimes force you to pay attention to it—either too hot or too cold—and you have to deal with it. But here, you can simply let it wash over you and put you into a state of relaxation and quiet pleasure.
* Lazy and lovely:  Blissful.
* No pressures:  I can drift in whatever way I want.
* Rabbit:  I always think of the March Hare in Alice in Wonderland:  Busy to the point of obsession; totally absorbed in his own little insignificant world. But he thinks it’s of paramount importance.
* Grey:  Grey is an in between color. It doesn’t make a point. It sort of blends into the background.
* Fairly large:  Hard to miss.
* Unafraid:  It is not intimidated by me; it's full of confidence.
* Scratching itself:  It has an itch which it is trying to relieve.
* Rapid motions:  Intense movement.
* Back foot:  That’s its strongest appendage. It has great power.
* Ear:  That’s its most important defensive alert system. It uses hearing to become aware of danger.
* Don’t pay attention to it:  I ignore it.
* Feel something strange:  My reverie was intruded upon.
* Aggressively scratching me:  It feels like an attack. Certainly it’s an invasion; the rabbit has no business doing that.
* Ripped my pajamas:  It destroyed my clothes—my covering.
* Through my skin:  It has injured me.
* Leg bleeding:  I’m starting to lose my life force. It’s not dangerous yet, but it’s an assault, an invasion.

Initial thoughts
This is going to be one of those dreams that, when retold as a metaphor, aligns into a nice, neat message. Even reading it in the form of the above list, one can already understand part of the dreamer’s conflict: relaxation versus industry.

It will be interesting to learn what her dilemma is.
Posted by David at 11:41