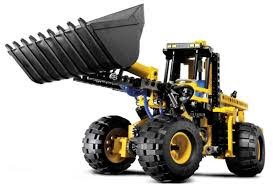 photo courtesy of bricklink.com
A dreamer had a dream that seemed prophetic and ominous. She wondered if her dream was about the USA national election. We decided to hold off coming to any conclusions until we analyzed the dream's metaphors. Below is the reconstructed dream in its metaphoric version. I have simply retold the dream replacing all of the dream symbols with the dreamer's own metaphoric descriptions of them. I have also included repeated phrases like, "There is a part of me" to remind the dreamer that every image in the dream represents an aspect of herself.


The reconstructed front end loader dream
There is a part of me that is leisurely going from one spot within myself to the next. I am appreciating it all in a pleasant way. The surroundings within me are natural and beautiful. They help relax me and they bring peace. There is a pleasant motion inside of me that brings calmness. It's like little gems of beauty and like the breathe of nature or of God inside of me. Then I see something new in me that is being built. There is disruption, and it is temporarily unsightly. There is the potential for danger. Parts of me are the gentle giants that are helping with the building and making changes. Things in me will never look the same again. Part of me is inquisitive, wanting to know more. And there is the possibility of harm being done to me. I decide to avoid this new part of me that is being built. I go to a different place in me, going around to take a different route, not as direct, but safer. But it's an error in judgement that will have consequences. There are the big, gentle giants in me that do the construction things. But because of their size, they may be unaware of anything as small as me. They would never try to harm me, but there could be an accident in me. There are also my waste products that are being discarded temporarily until they can be properly disposed of. I lose my balance and end up in a prone position of defenselessness. The part of me operating the giant--the part of me in charge--is oblivious to any potential harm. I feel the life being squashed out of me. I am no more. I see the possibility of ruin coming at me.

Thoughts
Is this a dream about national politics? Probably not. As we read the text in its metaphoric version, it becomes clear that the theme is mostly about a struggle within the dreamer herself. That doesn't mean that national politics didn't influence the imagery. But the cause and effect are the opposite of what the dreamer concluded at first. She felt that her dream was a dire prediction of what was going to happen in the USA. On the contrary, her sense of the national scene was simply a waking dream for her own growth process and the inevitable breaking down of patterns before new ones can re-emerge to replace them.

And is her life really about to be snuffed out for good? Or is it only old patterns that need to be set aside to make room for newer, healthier ones? We'll explore these possibilities tomorrow.
Posted by David at 09:32