A Dream About Prison And Pooping Out Eggs: Post #2 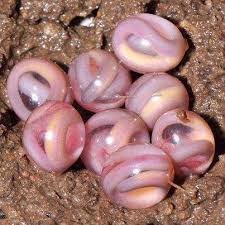 This week we’re examining a dream that has some peculiar imagery in it. There is a prison, there are lizards, and there is the act of defecating spongey eggs while in public. Taken at face value, this dream is absurd. But as we now begin converting the images into their metaphoric meanings, we will start to see the absurdity disappear and be replaced by a clear, meaningful message.

The way this is done is to engage the dreamer in a dialogue, asking neutral questions about each of her dream’s symbols. The first symbol in her dream is the word “prison.” I simply ask the dreamer to “tell me about” prisons. (You can read her response below.)

A prison is an archetype. That means that the word will connote pretty much the same feeling and imagery for everyone: A prison is a place that implies confinement and separation from the rest of society.

But it isn’t sufficient merely to rely on the archetypical meaning of the word. The individual dreamer’s own personal experience must enter into the equation. For example, a person who has been beaten or sexually assaulted in prison will have one view of the experience. A wayward teenager meeting with a sympathetic priest or counselor who turns the prisoner’s life around will have quite another. In this case, the dreamer has never been in prison, so her response is archetypical.

Tell me about…
* Prison:  It’s place that keeps you locked up. It’s a punishment for doing something you shouldn't have.
* Inmates:  The ones who are locked up in the prison.
* Young, inexperienced, stupid decisions:  They’re not bad people. They’re just naïve and lacking in wisdom. They’ve made some self-destructive choices.
* Engage in friendly conversation:  I try to interact with them, but they seem unwilling.
* Absolutely silent:  They will not acknowledge me in any way. They will not engage me.
* Walk away:  I feel as if I have been unable to interact, so I feel as if my work is done.
* No success:  I feel as if I failed.
* Points:  Draws attention to something of interest.
* Back side:  It’s probably the least desirable area of me. It’s where waste comes out of.
* Horror:  Shock. Upset. I don’t want to be associated with it.
* Pooping:  It’s the act of getting rid of waste and toxic material. It’s usually private, but here I am, doing it in public.
* Large gelatinous egg-like blobs:  They’re unfamiliar to me, so I find them suspicious. I am wary of them and uncomfortable around them.
* Ground:  Our foundation, Where we walk and live and establish ourselves.
* Pliable and spongy:  Not solid, likely to change and be unpredictable.
* Lizard:  I know they’re harmless, but I don’t like them. I find them kind of creepy—literally. You don’t know what they’re going to do, and they don’t belong in my world.
* Emerge from its egg:  It’s coming to life, and I will have to contend with it.
* Exit:  A way out, to get away.
* Almost run:  It’s urgent because I am so uncomfortable where I am.

Initial observations
What is already clear is that the dreamer is trying to “eliminate” something “creepy” from her life. We’ll ask her more about it on Friday.