A Pot Smoker Acts Out A Waking Dream: Post #3 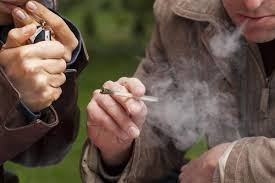 A man standing in line at a Goodwill store was subjected to second hand marijuana smoke and was particularly outraged because there was a mother and daughter waiting in line as well. It did no good to confront the pot smoker, and the man telling the story went away feeling that the issue had not reached resolution.

He understands the waking dream, and he began to work with this incident metaphorically, knowing that it contained a message for himself. On Wednesday, he went through his dream symbols, coming up with a metaphoric association for each one. (Scroll down to my last post to read about that step.) Today, we’ll reassemble the dream in its new, metaphoric form. As much as possible, we’ll use the dreamer’s own words, but we will add phrases like, “There is a part of me…” to remind the dreamer that every image in his dream is a facet of himself.

The pot dream retold as a metaphor
There is a place inside of me where I go to find bargains. I am at a point in myself that is the start of a new day. All the parts of me are waiting to take advantage of good bargains. This includes a part of me that needs extra care, a mother and a daughter inside of me that would need special courtesy and thoughtfulness. But there is also a part of me that is doing what it has the right to do; it’s legal. But it’s doing something that makes the partaking part of me high and not able to either think right or to have good reactions. It’s OK for this part of me to mess up its own mind, but to subject other parts of me to that involuntarily is totally out of line. It is totally thoughtless and uncaring of this part of me, especially sine there are actions that can be taken where he could do what he wanted and still not subject other parts of me to the negative effects. I become livid. I become aggressively confrontational with this part of me. But it has no effect on him; he doesn’t change at all. Later, we are able to disperse, and so the issue more-or-less resolves itself. But the outrage of it doesn’t go away from my mind.

Some observations
There is no question that this dream is highlighting a conflict. There is a part of the dreamer that feels entitled to think or do things that make him (metaphorically) “high,” but at the expense of thinking “right” or having “good reactions.” This behavior seems to be affecting other parts of him, especially those parts that “need special courtesy and thoughtfulness.” Yet, when the dreamer confronts the part of him that wants to be high, he is rebuffed, and the dreamer feels as if this has “no effect.”

This is already an interesting dilemma. But there is more: What is all the description about “finding bargains?” The dreamer uses the word bargain twice in his narrative.

We’ll ask him about this tomorrow.
Posted by David at 13:11