A Pot Smoker Acts Out A Waking Dream: Post #2 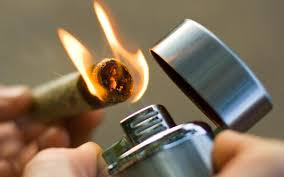 The dreamer this week was standing in line waiting for a Goodwill store to open. There were several others waiting along with him, including a man smoking cannabis. The dreamer was upset because there was also a mother and child being subjected to the man's second-hand pot smoke. The dreamer recognized the experience as a waking dream and decided to look at it more closely.

He and I went through the "Tell me about it" question and answer process in which I asked him to describe each of his symbols. We were looking for a metaphoric association that he would make with each of the images in his dream:


Tell me about...
* Goodwill outlet store:  It's a place to go to find bargains.
* Early morning:  It was the start of a new day.
* Several people in line:  We were all waiting to take advantage of good bargains.
* Woman with a little girl:  I always think of children as needing extra care. A mother and daughter would require special courtesy and thoughtfulness.
* Guy smoking pot:  He has the right to do that; it's legal in the State of Washington. But the drug makes you high and not able either to think right or to have good reactions.
* I couldn't believe it:  It's OK for him to mess up his own mind, but to subject others to that involuntarily is totally out of line.
* No clue about inappropriateness:  It was totally thoughtless and uncaring of him.
* Stand off to the side:  There are actions that can be taken where he could do what he wanted and still not subject others to its negative affects.
* I lost it:  I became livid.
* In his face:  I became aggressively confrontational.
* He didn't flinch:  It had no affect on him; he didn't change at all.
* The store opened:  We were able to disperse and so the issue more-or-less resolved itself.
* I stayed furious:  The outrage of it didn't go away from my mind.

Observations
Remember that all dream symbols are aspects of the dreamer's own state of consciousness at any given moment. Everything the dreamer said about his symbols in the section above is really a commentary on some aspect of himself. Even reading quickly through his remarks gives you a general idea of what this dream is commenting on. There seems to be some aspect of the dreamer's behavior or attitude that is causing some unclear thinking and reacting. This, in turn, seems to be affecting some part of himself that needs special courtesy and thoughtfulness. Without asking him, we can't do more than simply conjecture. So, on Friday, we'll take the interpretation through the next step and bring the dreamer back into the process.

If you enjoy these posts, please feel free to leave a comment.
Or, follow the discussion uninterrupted.
Scroll down to the bottom of this page to learn how.
Posted by David at 07:13