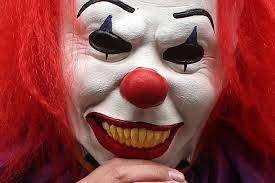 A young woman had a dream in which she saw a clown staring at her from her kitchen window. Eventually, the clown became sinister.

It was revealed through her dream’s metaphors that her own dark humor was trying to invade the area within herself where she “prepares her food.” In her own words, “There lives in me humor with a dark side." (I recommend scrolling back through the last few posts to follow our discussion.)

What was this dark humor that the dream was referring to? I asked the dreamer about it.

The dreamer tells her story.
The first thing to say is how surprised I was when my clown dream was retold as a metaphor. I kept getting chills running up and down my spine. When I listened to my own words being said back to me, I was amazed. The whole thing made sense, and I had no feeling that anything was extraneous.

This whole thing about my so-called humor getting in the way of “food I am preparing" is the story of my life. If you take “food” as a metaphor, it’s all the ideas and plans I make for myself—and for others. I won’t be conceited and say that everything I do is great, but I do have good ideas from time to time. I know that, because not only have my friends told me so, but sometimes, when the “clown” in me shoots down an idea, one of my friends will pick it up and bring it to life. Then, when I see it working, I say to myself, “Oh yeah. That was a good idea after all.”

But it’s the shooting the idea down that is probably my worst habit. This much I will say: I do have a really great sense of humor, and I can come up with a one-liner that is witty. But I think I developed that wit just so I could turn it on myself and keep myself from succeeding. My process is just like those clowns in my dream. At first they’re funny. But then they get ugly, and there is a mean streak that runs through their humor. I do this to myself all the time. I come up with an idea. Then I start joking about it. And finally, the jokes get really sarcastic. The next thing I know, I dismiss my original idea as not being any good. It’s like I’m trying to keep myself from succeeding.

Our discussion
This dreamer and I then took the discussion to the next level: Since her own process was now made especially clear to her through her dream, what could she do about it to change her negative pattern to a more constructive one? She finally decided that one of her friends was particularly supportive, but also had a good, critical head on her shoulders. It was a friend the dreamer trusted. She decided that, in the future, she would run her ideas past this friend, even when the ideas were in the early stages and not fully formed yet. She knew that her friend would take better care of her ideas than she would herself.