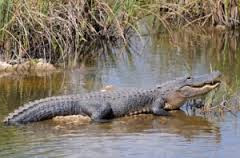 A young man has a dream in which he throws his mother into a pool of alligators. Is this a negative dream or a constructive one?

We have isolated the symbols, he has described each one metaphorically, and now it is time to reassemble the dream metaphorically. I will use his words to do so, but I will add phrases to remind him that every symbol and all facets of the dream represent himself.

Metaphorically reconstructed dream
There is a really interesting place inside of me. It is wild and untamed. You never know what might happen there. It can be dangerous if you’re not careful or don’t know what you’re doing. I’m surrounded by the part of me that is life-sustaining. But it can be filled with danger, too, or polluted or violent. I’m also with a part of me that lies and steals and does underhanded stuff and then blames it all on someone else. I don’t like being around this part of me. It makes me crazy. This part of me gets really weird, too. It splits into three. It can be confusing, and sometimes I don’t even know who I’m supposed to be, because I’m supposed to act different with each part of the split. I’m climbing up an incline—not too bad—but I have to work to get to the top. Then, when I’m there, I have an advantage because I can see better and further. I have to be careful from up here, so that I don’t fall. There is danger down below. The danger is the part of me that is self-reliant. It minds its own business and doesn’t disturb anything unless it needs something. Then it gets what it wants. In that sense, it can be counted on. I get this idea to throw the underhanded, lying part of me to the self-reliant part of me and let the self-reliant part consume the underhanded part. This would be a violent way to get the lying part of me away. I’d be done with the hassle. But I’m not a violent person, and I don’t want to injure myself, so I don’t like those thoughts. Still, I don’t even think. I just do it. I have no remorse. I don’t get excited, either. It’s like doing my chores—taking out the trash—I just do it. Then I come back to my senses and realize that I shouldn’t have done it. I lost myself in the dream and did things that I don’t believe in.

Initial thoughts
This dreamer is ambivalent to the very end. But, as seen from the metaphor, was it a good idea to throw his mother to the alligators? In this dream, he has taken a disingenuous part of himself and destroyed it with the part of him that is “self-reliant” and “can be counted on.” Then why the ambivalence? It is not uncommon to have mixed feelings about doing the right thing, especially if doing so involves the abrupt destruction of an old, familiar habit.

Tomorrow we’ll ask the dreamer what this is all about.
Posted by David at 13:54