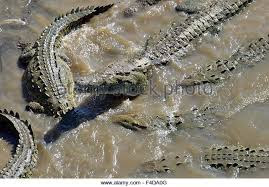 A young man had a dream in which he threw his mother into a pool of alligators. As horrifying as that seemed—even to the dreamer—it turned out that his action, as understood from the perspective of metaphor, was a constructive one. He had an abrasive relationship with his mother, one that was filled with deceit and dishonesty on her part, and he was trying to rid himself of her influences. Her attitudes were ones he had adopted in life, and now, as a young adult, he finally saw them for what they were. He perceived of the alligators (living inside of himself) as self-reliant and trustworthy, and his violent-seeming action was carried out only to try and cleanse himself.

But as he said, “I am not a violent person,” and his cleansing action also repulsed him. He was torn between his inclination to do no harm to anyone and his need to surgically rid himself of destructive habits.

The dreamer tells his story
Oh man! This sure is about me, alright. That thing about the part of me that lies and steals: that’s exactly right. And I know it, too. I guess I learned to do that stuff when I was little. My family life was kinda crazy. As a kid, I had to try and protect myself, so I got into some bad habits. I guess it’s not too surprising since my mom was doing exactly the same thing.

But I’m trying not to be like her. I keep trying to live my life in a different way. But then I get scared. I guess that’s the part of the dream that’s talking about danger. To me it’s scary to let all that stuff go. You know, all that lying stuff is like a safety net, and when I just rely on me—myself—it feels like I’m unprotected. So I’ve got this fight going on inside of me all the time. And when I’m in some place or with some people that make me nervous, it’s really hard not to go back to my bad habits. I want people to like me, and I think I have to show them something that’s better than I think I am.

So I guess what this dream is telling me is that sometimes I have to be more mean about it. See, that’s part of what I learned as a kid, too: Don’t make waves. Stay in the background and shut up. Then no one will notice you and you can stay out of trouble. So now the dream is saying that I have to come out and be strong—like a show of force—and really have a fight. I have to try to beat these old habits, to really win.

So I guess I like the alligators. (He laughs.) I guess I’d better join their team and pay them a visit. Actually, that doesn’t feel so bad. But it’s all still scary.

If you enjoy these posts, please feel free to leave a comment.
Or, follow the discussion uninterrupted.
Scroll down to the bottom of this page to learn how.
Posted by David at 09:07