A Dream About A House Washed Out To Sea 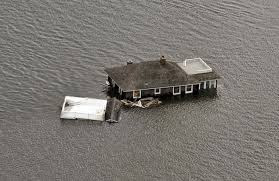 A young woman, vibrant, delightful and with eyes that shone with enthusiasm, visited me at my booth at a recent expo, and asked for help understanding the following dream.

A dream about a house being washed away
In my dream I was looking for a house to buy. I was walking through a house that I was considering. It was pure white, including the furniture and all the fixtures. I started on the top floor, looking at everything, and then went down a flight of stairs. There, I saw a couch that was also pure white, except for some throw pillows that were purple and a kind of golden-orange. I went down a second flight of stairs and was in the basement. I realized that the house was on an ocean beach, and there were glass doors looking out at the water. I went out of them onto the sand, and as I was looking around, I saw that the outside of the house was more like a cabin in the woods—sturdy, but not refined. Then, a giant wave came and washed the house out to sea. I was shocked at first, but then the house builder was with me, and he told me not to worry. This happened every day at about this time, and every day, he just rebuilt the house. Not only that, but because of this repeated phenomenon, he was offering the house at a really cheap price.

My initial reaction to this dream
This is the kind of dream that I must be careful with when I help interpret it. The fact is, I got extremely excited the minute I heard it. So many dreams are admonitions, course corrections, and reminders to the dreamer that they have once again inadvertently gotten sidetracked and need to revisit their goals and intentions in life. By contrast, dreams that are telling the dreamer that they are doing exactly what they ought to be doing, and that they are already on course, are the exception rather than the rule. From the first hearing, I had a strong hunch that this was going to be the latter type of dream.

There were multiple classic symbols: the color white, the house, the ocean, the fact that the dreamer in her dream was walking down flights of stairs to the basement—getting to the foundation of things. The fact that the builder was there to reconstruct the house every time it got washed away, and the fact that the house was inexpensive--affordable. All of those symbols seemed to suggest a healthy cleansing and renewal.

But since I had a strong personal reaction to a dream that was not my own, it was vitally important for me to back off and go through the steps of the dream interpretation process carefully. Many times, when I am convinced of a symbol’s meaning, I will surprise myself and feel a bit mortified if I present a wrong interpretation without careful questioning.

More Wednesday.
Posted by David at 11:10