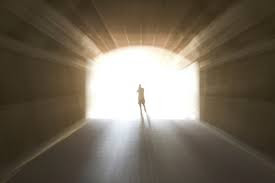 This week I am examining the experience of a woman who, as a teenager, was depressed and asked inwardly to die. She had a dream that had all the qualities of an angelic, out-of-body event. She was told to go back to her life because there was more she had to accomplish. (Scroll down to my last post.) I made the remark that this experience stands alone and need not be analyzed as a dream.

But then I asked if there was more that we might learn if we did go through the interpretation steps anyway. The dreamer agreed to try. So, in the manner that I usually approach dream interpretation, I asked her to comment on each dream symbol when I prompted her with the phrase, “Tell me about it.”

Tell me about…
*  Hall:  A connecting pathway.
*  High school:  A place where you learn at about the mid-level.
*  Staircase:  It’s where you can either ascend to a higher level, or return to a lower level. In my case, I was about to go down to the base level.
*  Deserted:  It’s usually busy, but now I was by myself.
*  Intense, overwhelming, bright white light:  It was otherworldly. The power was so far beyond me, it was beyond awesome. There was nothing to do but surrender.
*  Barely look at it:  It was so intense it was almost intolerable.
*  Stunned and didn’t move:  I was momentarily paralyzed in my surprise and awe.
*  Male voice, authoritative but kind:  In those days, my understanding of God was that He was male. So It’s not surprising that God—or His representative—came to me in a male form. This was definitely God-like.
*  Beckoned me forward:  It was asking me to enter into its interior space.
*  “Are you afraid?”:  I think that was said just to snap me out of my momentary paralysis.
*  I went forward into the light:  I kind of became one with it—not in the sense of being as great as it was, but in the sense of immersing myself in its energy and power.
*  Being taught:  I was receiving instruction and I was growing.
*  Wasn’t time to die:  I had been wanting to quit, and it told me that I had more to do.
*  Great gifts to give the world:  My suffering wasn’t useless. There would be benefits that I would be able to pass along.
*  The good of myself and the whole:  I got the message that I was part of a much larger picture, one that I probably didn’t understand. It was reassuring.
*  Lying on my stomach:  An unusual sleep posture for me.
*  Clawing the sheets:  I knew that the weight of what I had to do was back on my shoulders after I had felt so light and free in my dream. I knew there was a price to pay, and I wasn’t happy about it.

Initial thoughts
In many dreams the message of the interpretation is radically different than the un-interpreted dream. But not here. Stay tuned!

If you enjoy these posts, please feel free to leave a comment.
Or, follow the discussion uninterrupted.
Scroll down to the bottom of this page to learn how.
Posted by David at 10:31