A Car Stuck In A Parking Lot: Concluding Post 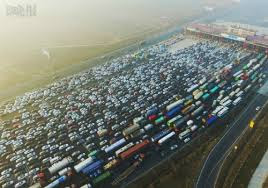 In a dream, a woman who attended a seminar couldn’t get her car out of the parking lot. It was parked in. She wondered if her dream was important.

She and I worked on the dream’s interpretation, and yesterday I posted the dream which had been restated in its metaphoric version. (Scroll down to yesterday’s post to read it.)

An examination of the dream makes it apparent that this dream has a coherent, logical storyline. There is a unifying theme, and despite the dreamer’s initial skepticism about the dream’s importance, it’s clear that it references something significant for her.

I was intrigued by several poignant sentences that were prominent in the reworked version:

* There is a part of me that is going to my own inner destination.
* It will be an in-depth learning experience.
* Somehow, it seems that the thing I am supposed to learn is less important than my just being there.
* I watch as this place inside of me is literally growing from the ground up. It is turning into a major campus for education.
* I ask for help from the parts of me in charge, but they won’t pay any attention to me.

The dreamer comments
I’m not sure I get everything this dream is supposedly telling me about. I guess, maybe, the reason I don’t identify with it more is because whatever it is hasn’t really happened yet. That’s the sense I get. It’s almost like it’s telling me to get ready for something that is going to take place down the road. The dream almost says that directly—the part about “being there is more important than knowing what the meeting is about.” And that I can relate to. I do have a vague feeling of restlessness in my life. Things that I used to do as a matter of course and which felt good and “right” to be doing are a little bit less satisfying to me these days. I’m thinking of little things that happen—mostly at work. Little annoyances that I used to just let sail over my head. Now, I find myself getting annoyed. I feel a vague urge for change.

Maybe that’s what the dream means when it says I’m heading “for my own inner destination.” That’s interesting to me. I’m not sure exactly what that means, but I have to say that I get a minor rush even when I think about it. Maybe there is something waiting for me that is meaningful. That would be great if it were true. At this point, I don’t know what it would be, though.

I asked her about the “parts of me in charge…won’t pay attention to me.”

Yeah. That was the part of the dream where I wanted to leave the seminar. I felt as if I needed a break. But this seems to be telling me that I don’t have a choice, that I have to stay: My car is parked in. Funny! And a little bit scary, too!

ANNOUNCEMENT
On March 11 & 12 I will be participating in the Body Mind Spirit Expo in the town of Hillsboro, just west of Portland, Oregon. I will be lecturing and helping with dream interpretations. Click on the Events page for details.
Posted by David at 09:01