A Dream About Watching A Car Crash: Concluding Post 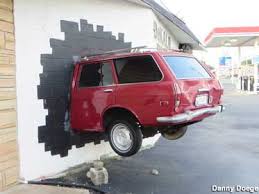 We have been eavesdropping on a dreamer wrestling with a nightmare from which she awoke, crying. The imagery of the dream, itself, was intimidating. But yesterday we reassembled the dream in its metaphoric version. Scroll down to my last two posts to follow the process of analyzing this dream.


What emerged in our interpretation were themes—just as they emerge in any dream. And being able to put our attention on the themes instead of the violent imagery of the dream represents a critical step in pulling away from the emotional charge that the dream leaves. It also shows us the path to take to begin working constructively on the dream’s message. The message, itself, is far less dire than the dream’s imagery. That is always important to keep in mind.


Conversation with the dreamer
In my discussion with the dreamer, I referred to the crash of a vehicle that resulted in the injury of some facet of herself. I pointed out that “vehicle” didn’t mean “car,” but more likely symbolized a way of approaching life. Some attitude or habit caused a “crash.” It resulted in a psychological injury. The injured part of her seemed to die away at first, but then it came back in an altered and even more sinister form. I asked her what she thought this might be referring to. Here are her words.


The dreamer analyzes her own dream
Really, it could be a couple of things that have been going on in my life. But the one I think it probably refers to is my tendency to not stand up for myself. As a child, I was never allowed to express my feelings. I was always put in my place if I showed any disagreement or independent thinking. My mother could become violent if I disobeyed. So I learned to keep my mouth shut. I have been trying to overcome this—to stick up for myself—but I am easily intimidated, and I tend to let people walk all over me. That, for sure, is the part of the dream where the injured part comes back to life in an even more sinister way. That’s exactly how it feels. And, yes, it has a tendency to try and “strangle” any efforts on my part to be assertive. The problem is that I don’t know how to overcome this in myself.


I suggested that she pursue a course in assertiveness training; there were some really good ones available, and I knew of a couple of “graduates” of these classes who had really been helped by them. I also reminded her of the first part of her dream—where she was looking for her vehicle “from above.” The dream seemed to suggest that she had already grown beyond this habit of being intimidated. She said she would try the training. She added that she was tired of the whole pattern in her life and would be relieved to find a solution. I wished her good luck!


If you enjoy these posts, please feel free to leave a comment.
Or, follow the discussion uninterrupted.
Scroll down to the bottom of this page to learn how.
Posted by David at 09:27