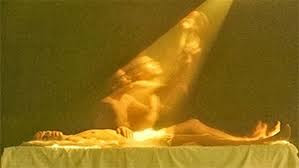 I have been exploring the possibility that dreams have more than one purpose when they appear to us.

I’ve been studying the following dream: An acquaintance dreamed of being in a congenial meeting with an old friend and neighbor he hadn’t seen in years. The next morning he received news that the friend had died. He was convinced that the friend had appeared to him in order to say goodbye. (Scroll down to my last post to read the dreamer’s own words.)

Original dream concept
I began by agreeing with the dreamer that this dream represented one of those wondrous occasions in which there is a blend between dream imagery and real life. Somehow life conspired to allow a dying friend to make a farewell visit to his former neighbor in the dream state. These kinds of events are more common than most people acknowledge.

Further analysis
But I wanted to examine this dream event further to see if there was more that it had to offer. The dreamer and I went through the five steps of the dream interpretation procedure, including the all-important “Tell me about it” phase. The result was the following dream restatement. As you read, pay close attention to one detail. Although this dream was primarily about a visitation from a dying neighbor, the dreamer made a point of saying that he had two neighbors, and one of them he did not get along with. Notice how this detail takes on greater meaning in the dream restatement.

Restated dream
There used to be two parts of me living in close proximity. I was at odds with one part, but the other was compatible. We shared similarities and communicated frequently. There was a separation, but even so, we were aware of each other. Eventually, this part of myself and me went our separate ways. But recently, the two of us re-established our bond, with as much caring, lightness and relaxation as ever. There was reminiscing. But the next day I learned that this part of me has left for good; it no longer exists. I think it was letting me know that it was leaving.

More typical dream analysis
The dream restated in this fashion tells its own story, one that is coherent with potentially valuable insights: The dreamer describes two aspects of himself. He is at odds with one of them and gets along well with the other. But the congenial part leaves him for good and makes a point of saying goodbye. I wanted to know if he could relate to that message.

The dreamer, who is approaching his 80th birthday, quietly talked about his failing health and the burden it has put on him just to survive. Life is an ordeal these days, with less enjoyment and more attention to the requirements of simply getting through the day. The pleasant part of living is receding from his life.

So this dream is valid on two, completely different levels. Stay tuned for more on this!