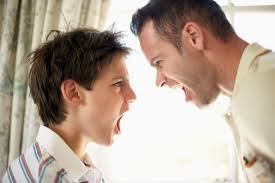 Last week I analyzed a disturbing dream about being cut by broken glass embedded in a wall. (Scroll down to my previous posts for details.) When the dreamer and I were done with the interpretation, he strongly identified with the dream analysis, and he tearfully described an abraded relationship he had with his teenage son.

I countered by pointing out that he was telling me about a conflict that was occurring outside of himself. I reminded him that dreams are commentaries on internal conflicts. I suggested that what he had described to me about his son was another dream on the same internal crisis. Instead of during sleep, the symbols were being acted out in “real” life, while the dreamer was awake; he was experiencing a waking dream. I asked him if he would be interested in analyzing the conflict he was having with his son as if it were a dream. I predicted that, by doing so, we would get even closer to the cause of his distress.

The dreamer was taken aback by my reply. It took him a while to respond. But eventually, he decided to take me up on my offer and look more closely at his conflicted relationship with his son. I asked him to describe the discord.

The dreamer’s waking dream
We’re always butting heads. Geeze! It’s impossible. You should see this kid. He’s smart—great in math. He gets terrific grades. He’s got an innate ability to problem solve. And he’s a good teacher; he’s forever helping his classmates with their homework. I mean, I should be really proud of him. And I am. Sort of. But he keeps choosing all this artsy-fartsy stuff: ceramics, choir. He even took an elective in cooking. It’s like he goes out of his way to choose dumb stuff. My God! If he’d just apply himself where it counted, he could be in advanced placement classes and get into any college in the country. I mean, there’s a science club. There’s a competitive math program. There are lots of stimulating options at his school. But will he consider any of that? No. And it’s driving me crazy.

Our further discussions
At first glance, it did not appear that a dream about being cut by glass and a concurrent waking dream about a teenager making frivolous choices had much in common. Certainly, that was the dreamer’s assessment. But I gently urged him to be patient. I predicted that the similarities would soon become apparent. Dreams can use a nearly infinite variety of symbols. One set of symbols can seem to be radically different from another set. But that is only at face value. Once we understand the symbols in their metaphoric meanings, the entire picture changes. And it is commonly the case that a second dream adds important clues to the message of the first dream.

The next step was to isolate the symbols in his waking dream and uncover their metaphoric meanings. We’ll do that on Wednesday.