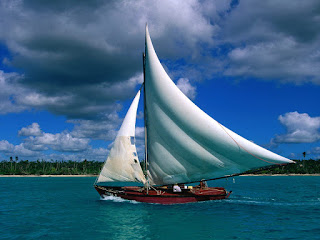 Second, because of the intense attraction between the two main dream figures, this dream lends itself to a discussion of the role of masculine and feminine in dreams.

Those of you who read my blog know that I treat startling, upsetting events that occur during the waking hours exactly as if they were dreams. But this dream is the more traditional kind that occurred while the dreamer was sleeping.

The Dream
In the dream, the dreamer, “Taylor,” who loves sailboats, was walking down a long dock where several large sailboats were tied up. As he walked, he was talking to a couple who owned one of the boats. They were about to go on a sailing trip. The husband was carrying a large box with food and other supplies. As they reached the boat, the husband climbed onto the boat and disappeared into the cabin. Taylor and the man’s wife continued walking. At one point, Taylor remembers looking back at the couple’s sailboat. He wanted to see what kind of boat it was. It was difficult to examine because the bright sun was behind the boat’s hoisted mainsail, and he was looking right into the glare. Still, he could tell that the boat was a large sloop.

Nevertheless, there were unspoken messages between them, and they were now lying on the grass in a sexual dance. The dream did not consummate in intercourse, but there was nudity, overt physical arousal and fondling.

That’s when Taylor woke up.

Taylor’s Initial Reaction to the Dream
There is a general misconception that such dreams are erotically enticing, especially if the dreamer is male. However, it has been my experience over the years that most dreamers who have dreams like this are really disturbed by them. Taylor was no exception; he was upset. But when we worked the dream through, he learned that it had a beautiful non-sexual message for him. We’ll begin the interpretation process in my next post. Stay tuned! And if you have thoughts or insights, please share them.
Posted by David at 15:23