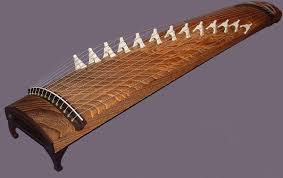 A dreamer who is a musician dreamt that he was tuning an exotic instrument, but the string broke, and this made such a violent and loud noise that it scared him awake.

Second, notice what he said about “violin.” How many of us would have come up with that answer? His reply is all about his struggle for perfection, and only as an afterthought does he comment on the potential for the instrument being “something beautiful.”

In order to elicit comments from him, I simply asked him to:

Tell me about…
* Bihjeebies:  Excessive, startled surprise.
* Tuning pegs:  They’re what you use to determine the pitch of an instrument.
* Four:  I always think of the base of a structure—like a pyramid. Most structures have four corners.
* Strings:  Wires under tension that produce a clear sound, often beautiful.
* Pyramid:  They have an air of ancient mystery and hidden secrets.
* Violin:  It’s my life, my vocation. For me, it’s all about the struggle to be good enough, to excel. It’s about trying to be artistically sensitive and to do something beautiful.
* East Asian instrument:  Exotic with a completely different concept of sound. What Asians admire and strive for, we in the west sometimes consider unpleasant.
* Square box:  The four corners again, and it’s a completely different design than what I’m used to seeing on my own instrument.
* Indian Tanbura:  Something alien to my training and culture. As such it seems both peculiar and fascinating.
* Tuning:  Adjusting the pitch so that the instrument sounded right.
* A little bit of correction:  Well, we use the expression “fine tuning.” That’s literally what I was doing.
* String broke:  When they’re old or under stress, the strings deteriorate and are no longer usable.
* Pleasant experience:  Something that feels good.
* Fly straight up toward the person:  You’re in danger of being hit and even injured; it’s scary.
* Never been hit:  It’s more the threat of a possibility than a real problem.
* Other musician:  A colleague.
* Disconcerting:  Upsetting.
* Noise:  In this case it was an auditory shock.
* Snapping sound:  Abrasive and startling.
* A huge explosion—almost deafening:  Overwhelming and terrifying.
* A bomb going off:  A destructive, dangerous end to whatever is the target.
* Body actually jerked violently:  I had a real, physical reaction that I found alarming.

Thoughts
One of the reasons this dream is interesting is because there are elements of it that can be understood in another context. The dreamer was jerked awake by a loud noise that occurred in his dream, and this was quite possibly his soul re-entering his body after an OBE. Yet if you examine his comments in relation to the last four symbols above—the ones associated with noise—they present a theme that is relevant to the dream.