A Dog Violently Jerked On A Leash: Concluding Post 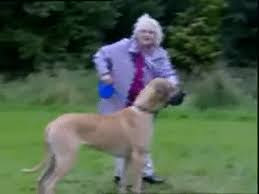 The message contained in a dream is a communication intended for the person who is dreaming. That is true whether the dream is one that takes place in the traditional way—during sleep—or is a “waking dream” that takes place during a time when the dreamer is awake. Waking dreams, typically, are events during the normal course of the day that leave the “dreamer” vaguely—or even overtly—upset.

The waking dream we are examining this week is a classic example. A woman who was shopping in her suburban neighborhood witnessed a dog owner yanking so hard on a leash that her dog flipped over on its back. The witness to this incident was startled, saddened, and felt that the dog had been treated abusively. She had a difficult time putting the incident behind her.

We have dealt with this incident exactly as if it were a traditional dream that this woman might have had during sleep. First, she told us the story of the incident. We then “dissected” her narrative, isolating words that we felt were important. Those words were the dream symbols. Next, I asked her to “tell me about” each of those words. I was looking for a broad definition of each one, a definition that would have included a sense of the word used as a metaphor. Then, yesterday, we reassembled the dream replacing her original symbols with her metaphoric definitions.

What emerged was a new kind of narrative. It was one that presented themes that seemed to be about an issue that the dreamer was grappling with. Specifically, the dreamer seemed to be violently “arresting the motion” of a part of herself that was friendly, inquisitive and whose job it is to guard her physical environment. I asked the dreamer if she identified with this image.

The dreamer tells her story
Oh my God, that is so me! I think, by nature, I’m a really gregarious person. I love people and socializing. But I also get my best ideas when I bounce thoughts off of friends and acquaintances. Over time, I’ve come up with some really innovative ways of doing things in my life, mostly because, when I present an idea to people, it gets honed by their reactions. I love that!

But then there’s this voice inside of me that goes, “You’d better back off now. You’re being a pest. You’re coming on too strong. People are going to get pissed off.” I don’t know what that’s about, but it is a constant struggle in me. The dream is right about how the dog in the dream got right back up and acted as if its mistreatment was totally normal. And the thing is, it’s not normal. It’s really bad.

Somehow, I have to come to grips with all this. There has to be a way that the controlling part of me goes a little bit easier on the"leash." As the dream said, the dog wasn’t doing anything wrong. It was the female, supposedly nurturing part of me that overreacted. I think that nurturing part is trying to be so caring of others that it abuses ME! I’ll have to work on that.
Posted by David at 09:41