A Dog Violently Jerked On A Leash 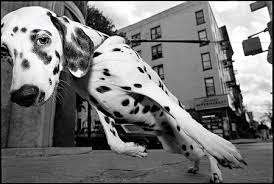 There is no difference between the images that come during sleep, and what we witness and take part in during the times when we’re awake. This is an observation that I have referenced repeatedly in this blog. When we dream during sleep, it seems to us as if fantastical images that our minds invent appear to us in random, often bizarre sequences. These strange “movies” of our imaginations tend to leave us perplexed.

Even though they may seem more orderly and logical, the sights we see during our normal, every-day, waking times are also images from the same source. What’s more, they have the same purpose, which is to offer us insights and course corrections, communicating in the language of metaphor.

Let’s say I am sleeping peacefully at night and I dream about hiking to the top of a mountain. The metaphor of ascending to a peak is often a spiritual one—about achieving greater heights and being able to “see” greater distances.

Similarly, if I’m wide awake and decide to take a weekend and go mountain climbing, the symbolism is identical. From a metaphysical perspective, the purpose of the experience is also identical, even though I am not technically dreaming. In either case, there is a message being delivered about an ascent to higher levels.

The mountain climbing example is peaceful and idyllic. It is a peculiarity of the world of dreams, however, that the most important messages being delivered happen with imagery that is less pleasant. There is a reason for that; dreams—both “sleeping” and “waking” dreams—need to arrest our attention if the message is important. That was the case with a waking dream that this week’s dreamer experienced during her normal, daily routine.

A dream about a dog on a leash
I was doing my weekly shopping errands in our usually-calm suburban neighborhood. I was walking toward an intersection, and in front of me was a woman with a dog on a leash. The dog seemed reasonably well behaved and minding its own business. But suddenly the woman gave a huge yank on the leash. She pulled so hard that it literally upended the dog. The dog landed on its back. I was shocked that anyone would do that. But the weird thing is that the dog, somehow, didn’t seem to be adversely affected by the jolt. It just got back on its feet and continued walking along as if nothing had happened. I couldn’t believe it! I’m still upset by it.

Some initial observations
Important dreams, whether they come to us during sleep or, as in this case, during the day when we’re wide awake, tend to have one quality in common. They tend to leave us feeling unsettled and shaken out of our complacency. The first thing dreams have to accomplish is to be remembered. That is often an obstacle; as a general rule, we are not accustomed to paying attention to them. So dream imagery is often upsetting. That is almost always a clue that the dream is delivering a message of importance. As this week progresses, we’ll explore what the message of the dog and leash is.

Wednesday, we’ll take a closer look.
Posted by David at 12:35