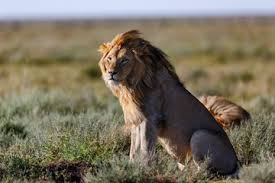 A woman dreamed that a lion broke into her house, but rather than being a threat, she realized that the two of them were supposed to work together. (Scroll down to my last post to read the dream.) Since the dream is lengthy, we only have space to show her replies to the “Tell me about it” prompts. If you read only her answers, I think you will discover that there is a definite, logical theme that runs throughout this dream.

Tell me about…
* House:   It’s where I spend most of my time. I go there to retreat into myself without the pressures of the outside world. It’s where I live.
* Living room window:  This one was large, and you could see out into my little corner of the world.
* Male lion:  A lion is the king of the beasts, as they say. Majestic, powerful, regal, not to be trifled with, impressive, a bit intimidating.
* Magnificent mane:  It made him look particularly kingly.
* Window pane:  It’s what protects you from the outside environment. It allows you to look through, but you don’t have to deal directly with the elements.
* Pushing against pane:  He was trying to break through it, to destroy it.
* Get into my house:  He wanted into my personal space which I found threatening, just because I wasn’t sure I could control him once he was inside.
* Alarmed:  Yeah. I was pretty nervous.
* Window broken out:  Well, there was no buildup. There was just suddenly a big, gaping hole in the wall and he could climb through it.
* No shattered glass:  That would have been dangerous and might have threatened injury. But there was none of that.
* Not panicked, but nervous:  My concern was that I wouldn’t have the skill to handle him, that I might be hurt, or that something would go wrong.
* Handle huge animal:  I didn’t feel I had the training or knowhow to deal with this situation, and I knew it was potentially dangerous.
* Defensive measures:  I was trying to figure out some way to handle the situation.
* Leash:  It’s a method of controlling an animal.
* Massive front shoulders:  Almost like his power center. I’m sure his hind legs are plenty strong, too. But If he starts to attack or take action, it all begins in the front shoulders.
* Guide him:  I was trying to help him—and me—to make sure whatever took place would be unharmful and constructive.
* Open door into the yard:  I wanted to steer him to something that was closer to his natural environment.
* Plenty attentive:  I was paying close attention.
* Team on a mission:  Yeah. We seemed to be working together for some reason. It was all new and odd, but I could tell that it was what I was supposed to be doing.
* Purpose and goal to be accomplished:  We were supposed to work together to achieve some kind of result. I could tell that it would be useful and beneficial, but I didn’t know what it was, yet.

If you enjoy these posts, please feel free to leave a comment.
Or, follow the discussion uninterrupted.
Scroll down to the bottom of this page to learn how.
Posted by David at 09:13