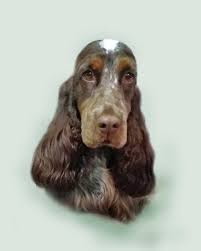 photo courtesy of jarde.org
Sometimes dream imagery is so bizarre that it is ludicrous even under the most implausible circumstances. That was the case with a dreamer who dreamed that she was at the veterinarian’s office with just the head of her cocker spaniel. There was no gore, no dismemberment, no surgical procedures. It was simply that, from the dream’s perspective, the only important element of the dog was its head. Here’s her dream:

A dream about a cocker spaniel’s head (among other things)
My dream has two parts. In the first part, I am standing outside looking at the night sky. I am not alone. There is a crowd of people all interested in the same thing. We are watching as a strange and frightening substance keeps falling out of the sky, as if it were rain. Each piece of this stuff is about a foot long and it is elongated and oily. It’s kind of the shape of a string of mucous or slobber. It’s ominous and threatening, and there is a huge amount of it coming down. We’re all nervous. Then the scene shifts and I am in the veterinarian’s office with my cocker spaniel (who, incidentally, in real life, died years ago). But it’s not the whole dog, just his head. That doesn’t seem to be a problem, and I don’t even know where the rest of his body is. But the vet is examining him and then tells me that my spaniel needs to eat a lot more salmon. That’s when I wake up.

Some observations about dreams
No question about it, dreams, when considered at face value, can be strange! That strangeness is what puts so many people off if they don’t understand how dreams work. After all, what sense can one possibly make of a series of disjointed images, first about globs of junk falling out of the sky, and then about body-less dogs needing to eat salmon? Our logical minds want to dismiss this as absurdity.

That is because we have yet to translate the dream’s “language” into English. Imagine if we were to suddenly come upon an obscure, indigenous tribe in Brazil, and the tribal leader suddenly started entreating us passionately in his language—one that no one could understand. It would be similar to looking at an absurd dream. There would be sounds, ones that we could recognize as human. We could probably even imitate most of them. But as for making sense of them, that would be beyond us.

The same is true with dream language. In the dream above, we have a series of images, any one of which we can recognize and understand by itself. Put them all together, and what we end up with is gibberish.

Like the tribal leader, there is a message of vital importance that wants to be delivered. Our first job is to become translators, and that’s what we’ll do on Wednesday when we begin to decipher this odd series of images, understanding them as metaphors.