A Waking Dream About An Ink Smear 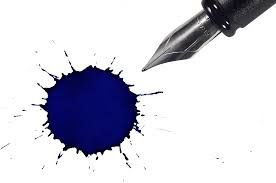 This week I’m examining a waking dream phenomenon that is less obvious than many of the dreams I feature. It is important; it is only that its imagery is less powerful and less likely to create a sense of crisis, so it’s easy to ignore. But if one pays attention to this phenomenon, there are nudges that are being offered by life. These nudges are designed to assist in decisions—perhaps not life-and-death-type decisions, but important ones.

The major types of waking dreams
Just to review, I have isolated three types of waking dream experiences that are worth paying attention to. 1) If one has an experience during the day that is shocking—like a near miss with an automobile—that is a waking dream one should look at. 2) If one is involved in a totally bizarre event—like the time a friend of mine was in a grocery store and the caps of an entire six-pack of beer flew off, shooting beer into the air—that is an event one should examine. 3) If an odd or unsettling phenomenon occurs more than twice, one should take a close look.

This week’s waking dream
The waking dream I will highlight this week has a repeating symbol. It happened to my wife, here in our home:

I was mopping up a small spill on the countertop and pulled a piece of paper towel from the roll. I noticed that one end of the towel was covered with what looked like ink. It didn’t come from the spill I was cleaning, because that was milk. I couldn’t imagine where the ink had come from, but didn’t pay much attention. Then, several hours later, I was writing myself a note on a pad, and again, a large ink spot appeared on the paper. I live in a household where dream activity is constantly monitored, so I was starting to pay attention. But still, I didn’t act on it until the next morning, when I was putting on my scarf and noticed that the same kind of dark spot had stained a couple of the tassels on one end. That’s when I said to myself, “OK. This is a waking dream; I need to look at it.”

Where did the ink come from?
It’s important to make clear, right away, that no one is pretending that “magic” took place—at least not in the traditional sense of that word. We finally discovered that a pen had leaked into the bottom of the container we keep next to the telephone, and the ink was making its way onto clothes, notepads and paper towel.

But there was a kind of magic that did take place: My wife was the only person who experienced the phenomenon; no one else in the family was affected. And, as we’ll see, there was “magic” to the timing, which was perfect to deliver a message to her that she needed to hear right at that particular point in her life.  Stay tuned!


If you enjoy these posts, please feel free to leave a comment.
Or, follow the discussion uninterrupted.
Scroll down to the bottom of this page to learn how.
Posted by David at 09:15