A Dream With Two Plots, One Of Them About About Einstein 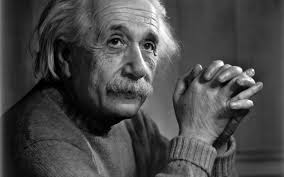 As we all know, many dreams, when examined literally, make no sense. Among the more common oddities in dreams are strange, disjointed plots. This week we’ll take a close look at a dream that has two distinct, seemingly-unrelated activities in the same story line. As is almost invariably the case, the story is nonsensical when examined literally. But as we’ll eventually see, when the dream is understood as metaphor, all of its peculiarities and disjointed qualities come neatly into focus as a cohesive message.

It is useful to know that, in this case, the dreamer is a woman.

The dream
I was standing in the employment line waiting to be interviewed for a possible job. There was one lady in line in front of me, and I remember noticing that she was heavyset and very nice. Then something called to me—I’m not sure what—and I turned around and walked out the door and into the street. A car and driver were waiting for me, and I got in. It was then that I noticed that the driver looked exactly like Albert Einstein. He started driving me around, and while we were exploring a variety of neighborhoods, he told me that I really needed to fall in love with a tree. Then he took me back to the employment office, and I walked into the same door that I had come out of. Only this time, I had a job in the office.

Peculiar conversations and activities in dreams
I suspect everyone will agree that this dream plot is both unlikely and strange. Why would Albert Einstein be in a dream 62 years after he died, driving a car and exploring a group of neighborhoods with the dreamer? And what on earth is the meaning of him telling her that she needs to fall in love with a tree?

As if that weren’t strange enough already, what possible connection is there between a car trip with Einstein and standing in an employment line? This dream clearly has two, separate, unrelated story lines. There is also the odd juxtaposition of needing a job at the beginning of the dream, and having a job at the end of it.

The nature of dreams
When dreams are weird, it is easier to understand that they are not to be taken at face value. Last week we looked at a dream about a musician who found herself playing an instrument that was unfamiliar to her. That dream was entirely plausible, and so there was the tendency to look at it literally. In this case, with the Albert Einstein dream, there is little danger of that. So the question arises as to the approach we should take in figuring it out. Either we decide that dreams are idiotic and random inventions of our minds, or we have to look elsewhere for their purpose.

We will use the approach I have found most helpful with all kinds of dreams; we will look at the metaphors.
If you enjoy these posts, please feel free to leave a comment.
Or, follow the discussion uninterrupted.
Scroll down to the bottom of this page to learn how.
Posted by David at 11:19