Use Of Cliches In Dream Imagery 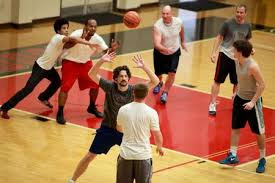 Sometimes dream imagery makes use of an expression so common in our daily speech that it’s amusing. We wonder how our subconscious could come up with anything so corny. The following, told recently during a dream class, is a good example:

In my dream I was playing an informal, pick-up game of basketball. It was just me and some other guys I know, and we were having a good time. But then I looked down and noticed that, instead of basket balls, we were using pairs of shoes tied together by their laces. In fact, I saw that we were using my shoes, and one of the guys shot a basket with them. The next thing I knew, the shoes were separated from each other. One of them made it through the basketball hoop and fell to the ground. The other shoe somehow ended up on top of the basketball hoop’s backboard and was balanced there, teetering back and forth on the edge. We all just stood around waiting for it to lose its balance and finally come down. That’s when I woke up.

Class reaction
When the dreamer finished relating his dream, the whole class started to chuckle at the obvious cliché: “waiting for the other shoe to drop.” The only person who didn’t get the subconscious joke right away was the dreamer himself. That is very common. When you are immersed in the plot of a dream, really taken in by its odd imagery, it is often difficult to pull away from your emotional involvement in the scene. It’s like going to a great movie—one that is really gripping (to use another common visual metaphor).

But this kind of separation is vital for understanding the dream message. As long as the dreamer is invested in the dream’s action, he will tend to take it literally, and he will neglect to pull away in order to study the dream event metaphorically.

The value of interpreting dreams in a class setting
That is why dream classes are so useful. Simply being with different dreamers has benefits. Knowing that there are others who experience bizarre nighttime scenes takes away the stigma of being weird. Beyond that, a dreamer benefits from the more objective viewpoints of others who are completely un-invested in the dream.

That was the case with this dreamer. Without anyone actually saying anything to him, he was, at first, startled by the sudden laughter. That, in turn, forced him to look at his dream from a different perspective. In a matter of seconds he, too, was in on the joke. And further, he was truly amazed at how witty his own subconscious could be. That it would come up with a pun-like image as common and as amusing as that, really made an impression on him.

Dreams make frequent use of such images. And understanding this image right away gave the dreamer a head start in working on the other images in his comical dream.

If you enjoy these posts, please feel free to leave a comment.
Or, follow the discussion uninterrupted.
Scroll down to the bottom of this page to learn how.
Posted by David at 11:28